These data have been superseded. Please see our latest releases for current estimates and contact information.
Explore Product View
BEA 08—44

Newly available statistics released today by the U.S. Bureau of Economic Analysis show that real GDP by metropolitan area grew in 308 of 363 metropolitan (statistical) areas in 2006. Growth in the metropolitan portion of the United States was 3.2 percent in 2006, slightly greater than the 3.1 percent growth in 2005.1 Strong growth in financial industries—specifically real estate and securities, commodity contracts, and investments—accounted for 39 percent of U.S. metropolitan area GDP growth in 2006. Contraction in the construction industry tempered growth in most metropolitan areas. 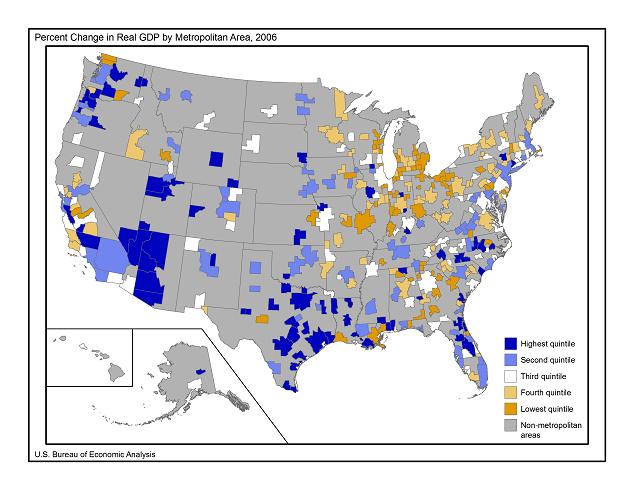 Relative to the nation, real growth was strong for metropolitan areas in the Southwest and in the Far West. In the Southwest, computer and electronic product manufacturing contributed the most to growth in the region. Austin-Round Rock, TX; Dallas-Fort Worth-Arlington, TX; Phoenix-Mesa-Scottsdale, AZ; and Houston-Sugar Land-Baytown, TX experienced double-digit growth in computer and electronic product manufacturing in 2006. In the Far West, Portland-Vancouver-Beaverton, OR-WA and Corvallis, OR also experienced strong growth in this industry.

These statistics have many potential important uses, including determining the overall size and growth of metropolitan economies, analyzing comparative industrial growth across metropolitan America, and assessing the impacts of natural disasters on cities. For a list of other potential uses, see "Potential Uses of BEA's Statistics of GDP by Metropolitan Area."

Methodology for GDP by Metropolitan Area

The methodology relies heavily on state- and county-level industry earnings data to distribute GDP by state to metropolitan areas. Earnings represent 64 percent of GDP and provide a reasonable indicator of economic output for most regions. County-level earnings data are available on a relatively timely basis, thus facilitating the production of timely GDP-by-metropolitan-area estimates (counties are summed to their metropolitan areas and controlled to state-level GDP). While relatively simple, the methodology appears to produce very useful and reliable information on the level and growth of economic activity in metropolitan areas.

GDP is BEA's most comprehensive measure of economic activity, thus requiring the compilation of many sources of data, including earnings by industry. BEA is exploring methodological improvements to accelerate the compilation and estimation processes of GDP source data that will improve the timeliness of metropolitan area GDP statistics.

Comments on the Prototype Estimates

BEA received many comments from data users related to the prototype release of GDP by metropolitan area in September 2007. These comments included requests for: (1) more timely release of the statistics, (2) a reduction in the number of data suppressions, and (3) data for metropolitan divisions and counties (even at the sacrifice of industry detail). These requests and other recommendations are being considered as we explore ways to improve our statistics subject to available resources.

BEA is interested in your comments on the GDP-by-metropolitan-area statistics. There has been substantial interest in these statistics and BEA plans to continue to produce an annual series. Please send your comments or suggestions to gdpbymetro@bea.gov.

The metropolitan (statistical) areas used by BEA for its entire series of GDP statistics are the county-based definitions developed by the Office of Management and Budget (OMB) for federal statistical purposes and last updated in November 2007. OMB's general concept of a metropolitan area is that of a geographic area consisting of a large population nucleus together with adjacent communities having a high degree of economic and social integration with the nucleus.

Next release of GDP by metropolitan area - September 2009.

BEA's national, international, regional, and industry estimates; the Survey of Current Business; and BEA news releases are available without charge on BEA's Web site at www.bea.gov. By visiting the site, you can also subscribe to receive free e-mail summaries of BEA releases and announcements.

1. The growth rates may differ from the national rates of GDP growth. See the "Explanatory Notes" for a detailed description.

3. County earnings are not available in 2000 on a NAICS basis. Therefore, the implicit price deflators and quantity indexes were re-based to 2001 in order to compute real GDP by metropolitan area.