These data have been superseded. Please see our latest releases for current estimates and contact information.
Explore Product View
BEA 13—05 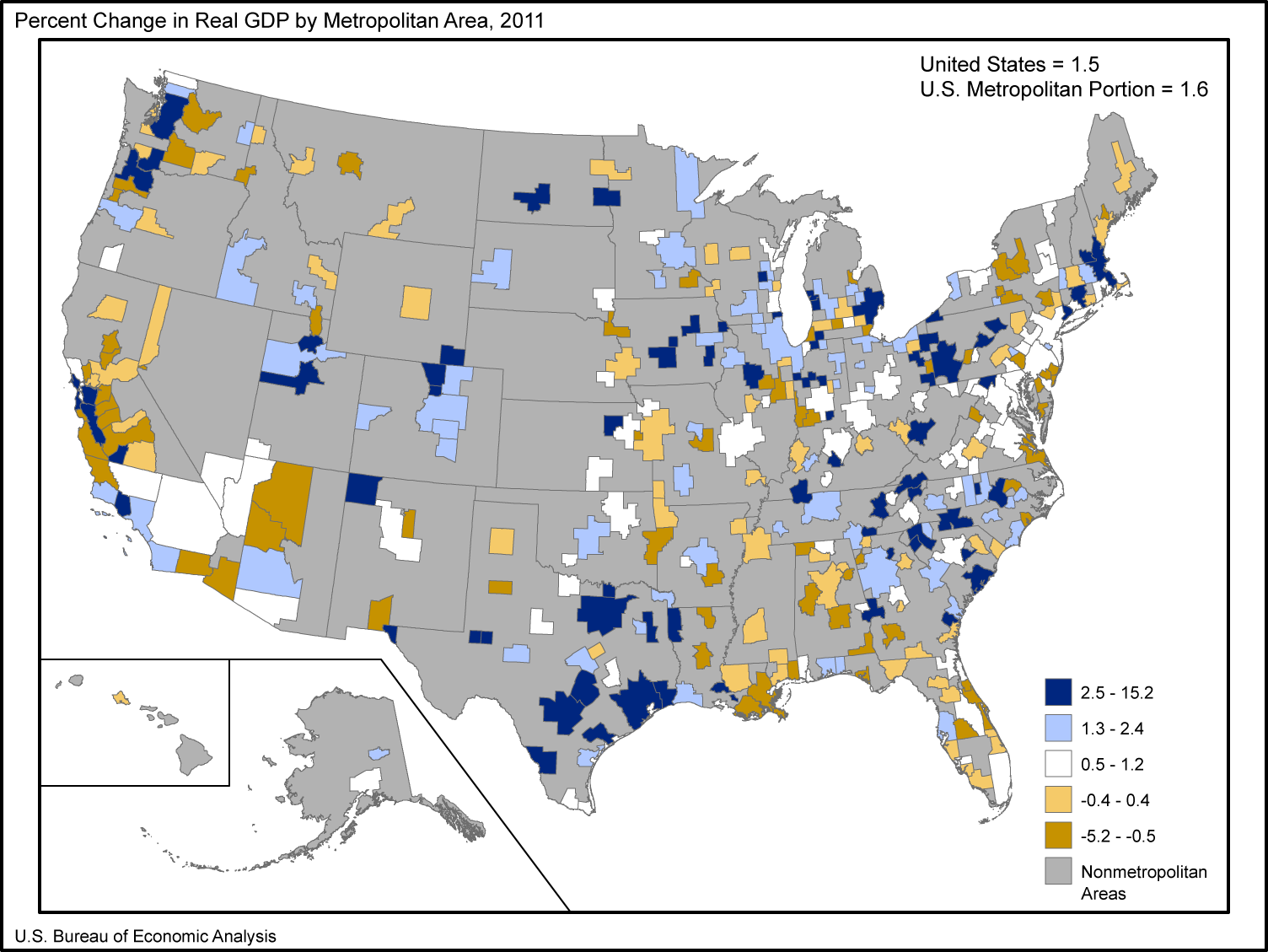 In 2011, professional and business services was a strong contributor to growth in many metropolitan areas. Metropolitan areas in the New England and Far West regions were affected most. Professional and business services contributed more than a percentage point to growth in Worcester, MA; San Francisco-Oakland-Fremont, CA; San Jose-Sunnyvale-Santa Clara, CA; San Diego-Carlsbad-San Marcos, CA; and Kennewick-Pasco-Richland, WA. The industry also drove growth outside these regions, most notably in Peoria, IL and Joplin, MO where the industry added nearly two percentage points to real GDP growth in 2011.

Durable-goods manufacturing continued to spur growth in many of the nation's metropolitan areas in 2011. Strong contributions from this industry fueled growth in many small metropolitan areas where production of these goods constitutes a large portion of the area's economy.3 This is especially true in the Great Lakes region where durable-goods manufacturing contributed 7.0 percentage points to growth in Kokomo, IN and 6.9 percentage points to growth in Columbus, IN. Kokomo, IN and Columbus, IN were two of the fastest growing metropolitan areas in 2011, with overall real GDP growth of 7.1 percent and 7.8 percent, respectively.

The statistics of GDP by metropolitan area released today are consistent with the GDP-by-state statistics released in June 2012; however, these statistics do not incorporate revisions to national GDP by industry released by BEA in November 2012. These revisions will be included in our September 2013 release of GDP-by-metropolitan-area statistics. Compared with the previously published GDP-by-industry statistics, the overall picture of the economy for 2009—2011 did not change. Similarly, the industry trends in the GDP-by-metropolitan-area statistics are similar to the national trends, although there are some differences in magnitude.

The advance statistics of GDP by metropolitan area for 2011 are based on source data that are incomplete or subject to further revision by the source agency. Revised statistics, based on more complete data, will be released in September 2013.

Metropolitan (statistical) areas. The metropolitan (statistical) areas used by BEA for its entire series of GDP statistics are the county-based definitions developed by the Office of Management and Budget (OMB) for federal statistical purposes and last updated in December 2009. OMB's general concept of a metropolitan area is that of a geographic area consisting of a large population nucleus together with adjacent communities having a high degree of economic and social integration with the nucleus.

1. Real GDP growth in the nation's metropolitan areas in this release differs from previously published growth rates for the U.S. See the box above and the "Explanatory Notes" for detailed explanations.

3. Small metropolitan areas are those with real GDP of less than $10 billion.