These data have been superseded. Please see our latest releases for current estimates and contact information.
Explore Product View
BEA 13-42 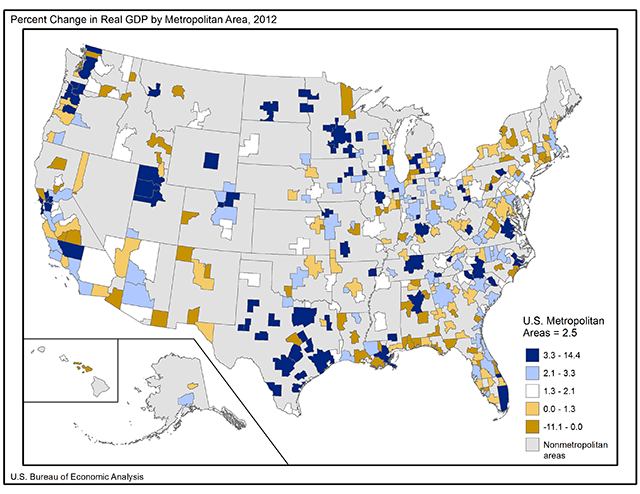 The statistics of GDP by metropolitan area released today are consistent with the GDP-by-state statistics released in June 2013 and incorporate revisions to national GDP by industry released by BEA in December 2012. However, these statistics do not incorporate the comprehensive revision to the national income and product accounts released in July 2013. The comprehensive revision included the capitalization of research and development expenditures and artistic originals and improved measures of transactions for defined benefit pensions; these will be included in the September 2014 release of GDP-by-metropolitan-area statistics. Changes in GDP will likely be concentrated in metropolitan areas where industries affected by these revisions account for a notable portion of total GDP. For more information, see Preview of the 2013 Comprehensive Revision of the Industry Economic Accounts in the June 2013 issue of the Survey of Current Business, BEAs monthly journal.

The advance statistics of GDP by metropolitan area for 2012 are based on source data that are incomplete or subject to further revision by the source agency. Revised statistics, based on more complete data, will be released in September 2014.

1. The GDP data in this release do not incorporate the new concepts and definitions that were part of the comprehensive revision to the National Income and Product Accounts released in July 2013. Those changes, along with statistical revisions, will be included in the September 2014 release of GDP by metropolitan area. See the box above.

2. See section on Advance Statistics of GDP by Metropolitan Area for 2012 by NAICS Sector.

4. Small metropolitan areas are those with real GDP of less than $10 billion.