These data have been superseded. Please see our latest releases for current estimates and contact information.
Explore Product View
BEA 15-44 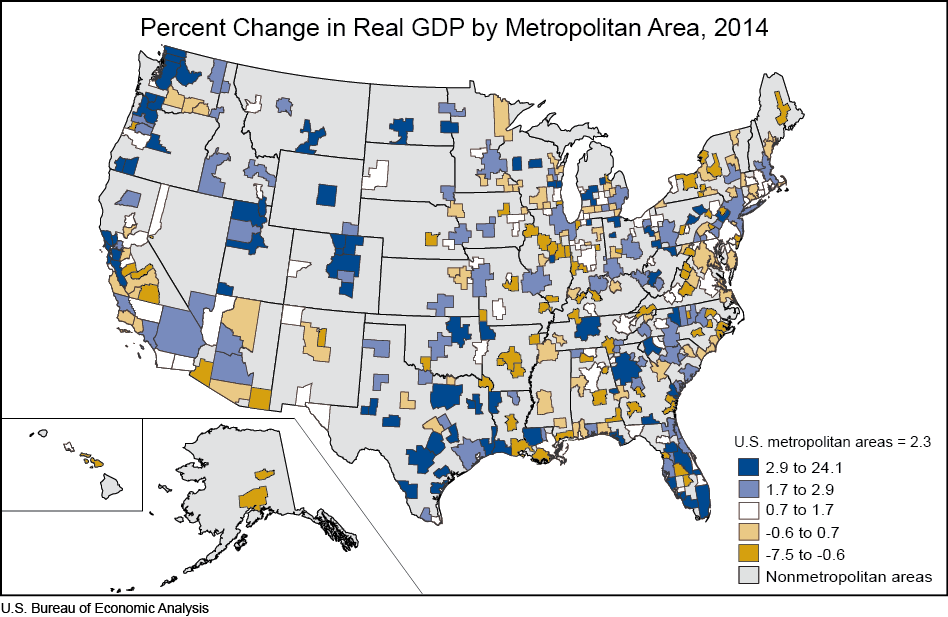 Although natural resources and mining was not a major contributor to growth for the nation, this industry contributed to strong growth in several of the fastest growing metropolitan areas. Mining in the Permian Basin and Cline formation led to notable growth in total real GDP for Midland, TX (24.1 percent) and San Angelo, TX (11.4 percent). Mining in the Marcellus shale formation contributed significantly to the 9.5 percent increase in total real GDP for Wheeling, WV.1

Tables 1–3 show these results in more detail; complete detail is available on the BEA Web site at www.bea.gov.

1The location of these formations can be found on the following map released by the EIA: http://www.eia.gov/oil_gas/rpd/shale_gas.jpg.

The advance statistics of GDP by metropolitan area for 2014 are based on source data that are incomplete or subject to further revision by the source agency. Revised statistics, based on more complete data, will be released in 2016.

More information on the methodology used to produce these advance 2014 statistics, on the revised statistics of GDP by metropolitan area for 2001–2013, and on revisions to these statistics will appear in an article in the October 2015 issue of the Survey of Current Business, BEA's monthly journal.