These data have been superseded. Please see our latest releases for current estimates and contact information.
Explore Product View
BEA 18-42

UTULEI, AMERICAN SAMOA (August 24, 2018) -- Today, the Bureau of Economic Analysis (BEA) is releasing estimates of gross domestic product (GDP) for American Samoa for 2017, in addition to estimates of GDP by industry and compensation by industry for 2016.1 These estimates were developed under the Statistical Improvement Program funded by the Office of Insular Affairs (OIA) of the U.S. Department of the Interior. 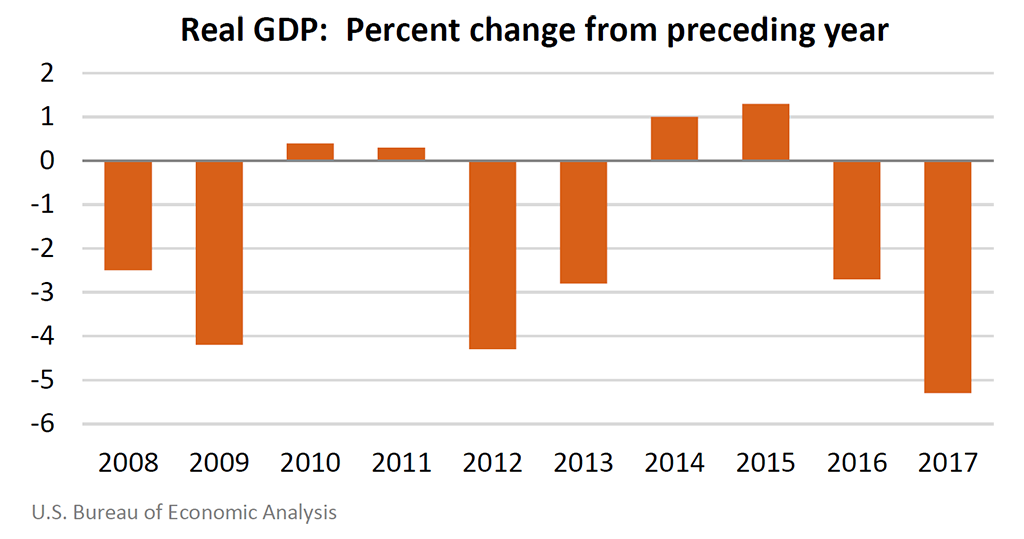 The decline in the American Samoa economy reflected decreases in exports of goods and government spending (see Table 1.4). These decreases were partly offset by a decrease in imports of goods, which is a subtraction item in the calculation of GDP.

Exports of goods decreased 22.8 percent primarily due to a decrease in exports of canned tuna and related products. One of two tuna canneries located in American Samoa closed in December 2016.

Government spending also decreased, reflecting a continued decline in investment spending by the territorial government. Major infrastructure projects including the Satala Power Plant and the Ta'u solar microgrid were complete or nearly complete by the end of 2016.

The compensation by industry estimates, which are measured in current dollars, show trends in compensation for major industries (see Table 2.6). Total compensation increased in 2016, reflecting growth in wages in the private sector.

Estimates for 2015 and 2016 that were released on August 14, 2017 have been revised in order to incorporate improvements to source data, including:

Quantities and prices. Quantities, or "real" volume measures, and prices are expressed as index numbers with a specified reference year equal to 100 (currently 2009). Quantity and price indexes are calculated using a Fisher chain-weighted formula that incorporates weights from two adjacent years. "Real" dollar series are calculated by multiplying the quantity index by the current-dollar value in the reference year (2009) and then dividing by 100.