The U.S. Census Bureau and the U.S. Bureau of Economic Analysis announced today that the goods and services deficit was $57.6 billion in February, up $0.9 billion from $56.7 billion in January, revised. 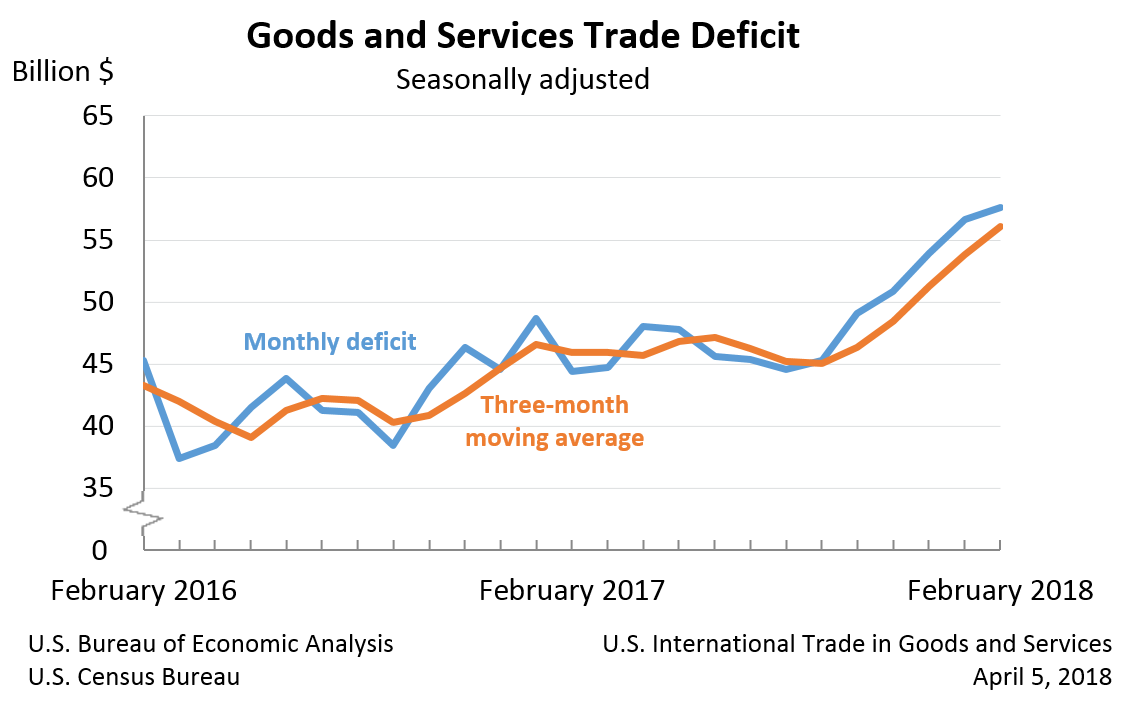 The average goods and services deficit increased $2.2 billion to $56.1 billion for the three months ending in February.

Year-over-year, the average goods and services deficit increased $10.1 billion from the three months ending in February 2017.

Exports of goods increased $3.0 billion to $137.2 billion in February.

Exports of goods on a Census basis increased $3.1 billion.

Exports of services increased $0.5 billion to $67.3 billion in February.

Imports of goods increased $3.3 billion to $214.2 billion in February.

Imports of goods on a Census basis increased $3.5 billion.

Imports of services increased $1.1 billion to $47.8 billion in February.

The real goods deficit decreased $0.9 billion to $69.1 billion in February.

All statistics referenced are seasonally adjusted; statistics are on a balance of payments basis unless otherwise specified. Additional statistics, including not seasonally adjusted statistics and details for goods on a Census basis, are available in Exhibits 1-20b of this release. For information on data sources, definitions, and revision procedures, see the explanatory notes in this release. The full release can be found at www.census.gov/foreign-trade/Press-Release/current_press_release/index.html or www.bea.gov/newsreleases/international/trade/tradnewsrelease.htm. The full schedule is available in the Census Bureau’s Economic Briefing Room at www.census.gov/economic-indicators/.

Upcoming Updates to Goods and Services

Revised statistics on trade in goods on a Census basis will reflect 1) corrections and adjustments to previously published not seasonally adjusted statistics, 2) reclassifications of several end-use commodities, and 3) recalculated seasonal and trading-day adjustments.

In addition to revisions to goods on a Census basis, revised statistics on goods on a BOP basis will reflect revised BOP adjustments, which are adjustments that BEA applies to goods on a Census basis to convert them to a BOP basis. With this annual update, BOP adjustments for estimating exports through the Foreign Military Sales (FMS) program will be discontinued because the Census-basis goods data now provide more complete coverage of these exports. BEA will use the Census-basis exports as the source for FMS goods for statistics beginning with 2010. Other revisions to BOP adjustments will reflect newly available and revised source data and recalculated seasonal and trading-day adjustments beginning with 2015. For more information on BOP adjustments, see the “Goods (balance of payments basis)” section in the explanatory notes.

Revised statistics on trade in services will reflect 1) a new method for estimating goods and services transferred through military grant programs, 2) newly available and revised source data, primarily from BEA’s surveys of international services transactions, 3) recalculated seasonal adjustments, and 4) revised temporal distributions of quarterly source data to monthly statistics (see the “Services” section in the explanatory notes for more information). Exports will be revised beginning with 2010 and imports will be revised beginning with 2013.

An article previewing BEA’s 2018 annual update of the international transactions accounts will appear in the May 2018 issue of the Survey of Current Business. If you have questions, please contact BEA, Balance of Payments Division, at InternationalAccounts@bea.gov.

With the releases of the FT-900 and the FT-900 Annual Revision on June 6, 2018, the reference year for the chained-dollar series will be updated to 2012 from 2009 to reference the time series on prices from a more recent year. The historical chained-dollar series, which begin in 1994, will also be revised to reflect the new reference year. See the “Adjustments for price change” section in the explanatory notes for more information.

If you have questions, please contact the Census Bureau, Economic Indicators Division, on (800) 549-0595, option 4, or at eid.international.trade.data@census.gov.

U.S. Trade in Goods and Services by Selected Countries and Areas, 1999-present (Excel)