These data have been superseded. Please see our latest releases for current estimates and contact information.
Explore Product View
BEA 18-68

Today, the Bureau of Economic Analysis (BEA) is releasing estimates of gross domestic product (GDP) for the U.S. Virgin Islands (USVI) for 2017, in addition to estimates of GDP by industry and compensation by industry for 2016.1 These estimates were developed under the Statistical Improvement Program funded by the Office of Insular Affairs (OIA) of the U.S. Department of the Interior.

Effects of Hurricanes Irma and Maria on Source Data

The U.S. Virgin Islands suffered extensive damage from two major hurricanes in September 2017. These hurricanes affected the availability of various source data used in the estimation of USVI GDP, including financial statements for the territorial government and its independent agencies. 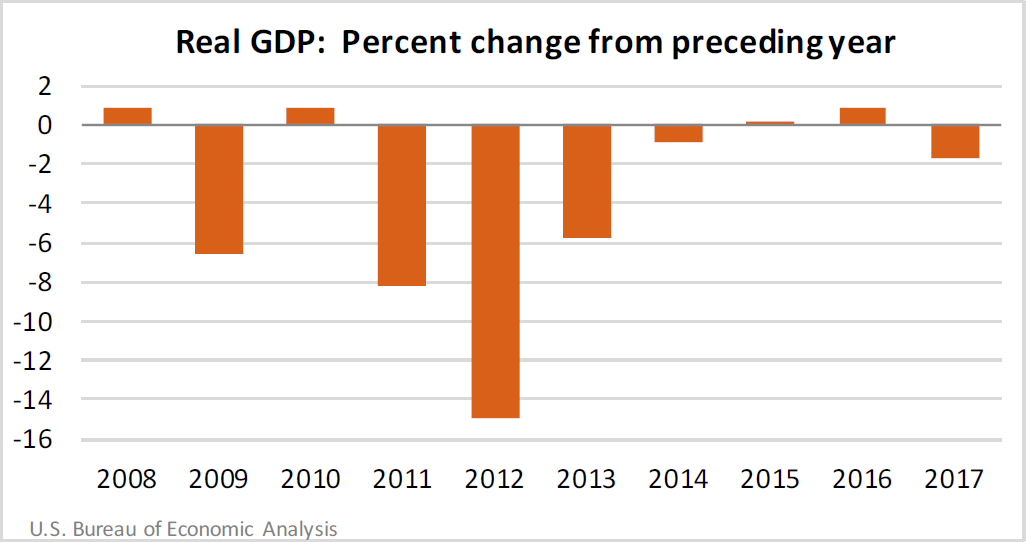 The decline in the USVI economy reflected decreases in exports of services and consumer spending (see Table 1.4). These decreases were partly offset by an increase in investment spending.

The estimates of GDP by industry for the USVI show that the private sector was the source of the growth in real GDP in 2016 (see Table 2.5). The growth in “other services” reflected the reopening of an oil storage terminal on St. Croix; a new operator took ownership of the facility previously owned by Hovensa and began receiving shipments of petroleum.

The compensation by industry estimates, which are measured in current dollars, show trends in compensation for major industries (see Table 2.6). Total compensation increased in 2016, reflecting growth in wages for “other services.”

Estimates for 2014 to 2016 that were released on December 1, 2017 have been revised in order to incorporate improvements to source data, including:

Moving forward, an agreement between OIA and BEA will extend and improve the estimates of GDP for the USVI. The information provided by the USVI government will continue to be critical to the successful production of these estimates.

Personal consumption expenditures (PCE), also referred to as “consumer spending,” measures the goods and services purchased by “persons”—that is, by households and by nonprofit institutions serving households (NPISHs)—who are resident in the USVI.

Private fixed investment (PFI) measures spending by private businesses, nonprofit institutions, and households on fixed assets in the USVI economy. Fixed assets consist of structures, equipment, and software that are used in the production of goods and services.