These data have been superseded. Please see our latest releases for current estimates and contact information.
Explore Product View
BEA 21-21

Today, the Bureau of Economic Analysis (BEA) released estimates of gross domestic product (GDP) for the U.S. Virgin Islands (USVI) for 2019, in addition to estimates of GDP by industry and compensation by industry for 2018.1 These estimates were developed under the Statistical Improvement Program funded by the Office of Insular Affairs (OIA) of the U.S. Department of the Interior.

The estimates of GDP for the USVI show that real GDP—GDP adjusted to remove price changes—increased 2.2 percent in 2019 after increasing 1.6 percent in 2018 (table 1.3).

As shown in chart 1, the increase in real GDP reflected increases in private fixed investment, exports, and consumer spending. These increases were partly offset by decreases in inventory investment and government spending.2 Imports, which are a subtraction item in the calculation of GDP, increased. 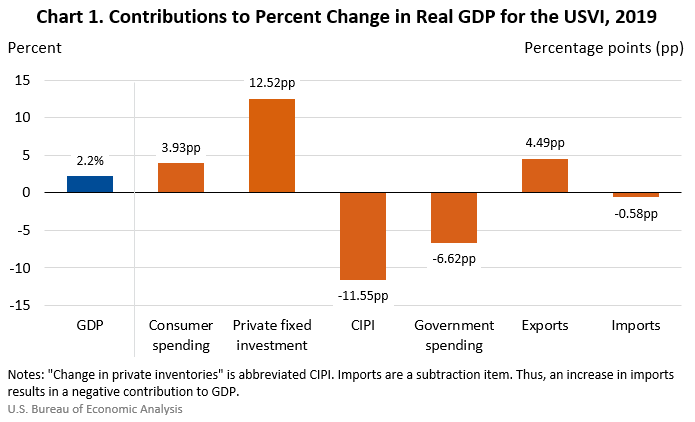 There is often interest in how much a specific GDP component contributes to the change in real GDP. BEA publishes this measure in news release table 1.4. Chart 1 shows both the percent change of total real GDP and the contributions (in percentage points) of each major component to that change. For example, exports of goods and services accounted for 4.49 percentage points of the 2.2 percent increase in real GDP in 2019. This means that, all else equal, had exports neither increased nor decreased in 2019, real GDP would have decreased 2.3 percent.

Private fixed investment doubled from the previous year, reflecting growth in business purchases of equipment and in construction, including of homes. A refinery and oil storage facility on St. Croix invested in major capital improvements during 2019 as part of the current owner’s preparations to resume refining operations that were shut down by the former owner of the facility in early 2012. Additionally, disaster-related insurance payouts and federal assistance supported the reconstruction and major repairs of businesses and homes that were destroyed or heavily damaged by two major hurricanes in September 2017.

Within exports, services increased 23.0 percent. For the USVI, exports of services consists primarily of spending by tourists and business travelers. According to USVI government statistics, total visitor arrivals to the USVI increased in 2019; the number of air visitors, who spend substantially more in the islands on average than cruise visitors, increased 30.5 percent. 2018 visitor arrivals by air had been low in the aftermath of the 2017 hurricanes.

Consumer spending increased 5.8 percent, reflecting growth in household purchases of goods, such as motor vehicles and food, and services, including health care.

These increases were partly offset by declines in inventory investment and government spending. The decline in inventory investment reflected a slowdown of petroleum products imported and stored in the islands. Government spending decreased 15.4 percent, reflecting a decline in spending on disaster response and recovery activities by the federal and territorial governments.

The USVI suffered extensive damage from two major hurricanes in September 2017. These hurricanes, along with the ongoing COVID-19 pandemic, affected the availability of various data sources typically used in the estimation of USVI GDP. For example, as of mid-May 2021, several of the USVI government’s fiscal year 2019 financial statements were unavailable.3 In place of these financial statements, BEA used information from budget documents, unaudited operating and financial statements, reports on federal grant expenditures, and the Government of the U.S. Virgin Islands’ new Open Finance database, which includes checkbook-level spending by the primary government.4

The estimates of GDP by industry show that the private sector was the major source of the increase in real GDP in 2018 (table 2.5). Goods-producing industries were the largest contributor to the increase, reflecting increases in construction activity in the months following Hurricanes Irma and Maria.5

Accommodation and food services was the largest negative contributor in the private sector, reflecting a decline in tourism activity following the hurricanes. Total visitor arrivals to the USVI decreased in 2018; the number of air visitors, who spend substantially more in the islands on average than cruise visitors, decreased more than 20 percent. The territorial government sector also contributed negatively to economic growth, primarily reflecting operating losses of government utilities.

The compensation by industry estimates, which are measured in current dollars, show trends in compensation for major industries (table 2.6). Total compensation increased in 2018; the largest contributor was goods-producing industries, which includes construction. U.S. Bureau of Labor Statistics data show that wages paid to construction industry workers in the USVI increased 84 percent.6

This release also includes the results of a comprehensive update of the territorial economic accounts. Comprehensive updates are typically performed every 5 years, based on the Census Bureau’s every-5-years economic censuses of island areas.

The revised real GDP estimates exhibit a similar pattern of growth as the previously published estimates (chart 2). However, there are notable revisions within the components of GDP, including to consumer spending and private fixed investment. 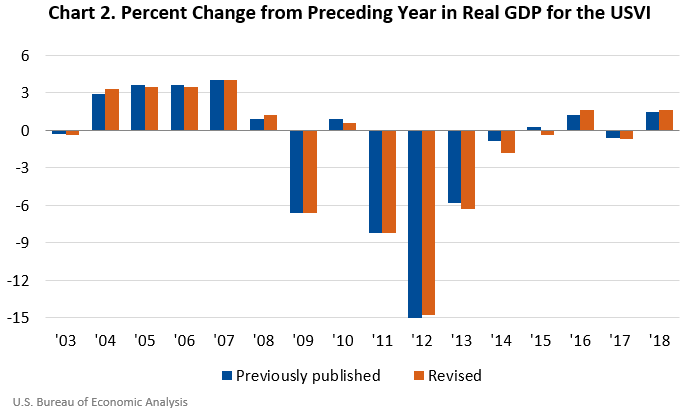 Revisions to GDP in earlier years primarily reflect improvements to the methods and source data used to estimate private fixed investment in structures. The new estimates incorporate newly available data on business revenues by type of construction from the 2017 ECIA and are inflation-adjusted at a higher level of detail.

4 The Government of the United States Virgin Islands Open Finance database is available at https://usvi.spending.socrata.com/.

5 Construction activities performed by private companies on behalf of the government sector are reflected within private sector industry value added.

6 The data are available at www.bls.gov/cew/.

Personal consumption expenditures (PCE), also referred to as “consumer spending,” measures the goods and services purchased by “persons”—that is, by households and by nonprofit institutions serving households (NPISHs)—who are resident in the USVI.

Private fixed investment (PFI) measures spending by private businesses, nonprofit institutions, and households on fixed assets in the USVI economy. Fixed assets consist of structures, equipment, and software that are used in the production of goods and services.