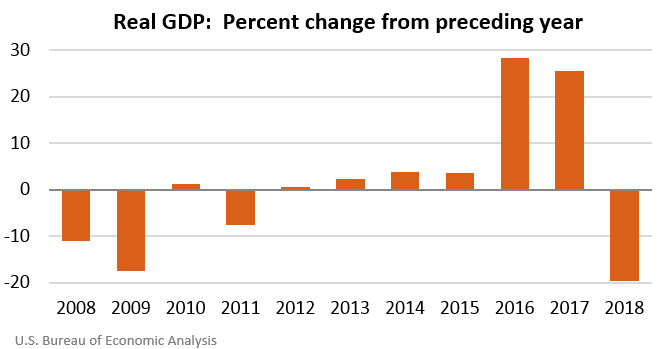 The decline in the CNMI economy primarily reflected decreases in exports of services and private fixed investment that were partly offset by growth in government spending.
Exports of services decreased 38.8 percent, due to a decrease in visitor spending, including on casino gambling. Revenues from casino gambling dropped over 50 percent. The number of visitors to the CNMI decreased 21.5 percent, reflecting the effects of Typhoon Yutu, which made landfall on Saipan and Tinian in October 2018.
Private fixed investment decreased 19.8 percent, reflecting a decline in business spending on construction and equipment. However, business spending on construction and equipment remained at historically high levels, supported by continued development of the casino resort on Saipan and the start of post-typhoon repairs and reconstruction activity.
Partly offsetting the declines in exports of services and private fixed investment was growth in government spending, particularly by the federal government. Federal government spending more than doubled from the previous year, primarily due to recovery activities following Typhoon Yutu.
For more information, read the full report.
Download Acrobat Reader