Real gross domestic product increased 0.3 percent in 2019 after decreasing 2.4 percent in 2018, according to estimates released today by the Bureau of Economic Analysis. The statistics released today are BEA’s first official release of GDP for Puerto Rico. The release includes updated estimates for 2012 to 2018 that incorporate new and additional source data and methodology improvements to the prototype GDP statistics that were released in September 2020.

The increase in real GDP in 2019 reflected an increase in exports. Although private inventory investment, government spending, and consumer spending declined, these decreases were largely offset by a decrease in imports, which is a subtraction item in the calculation of GDP. 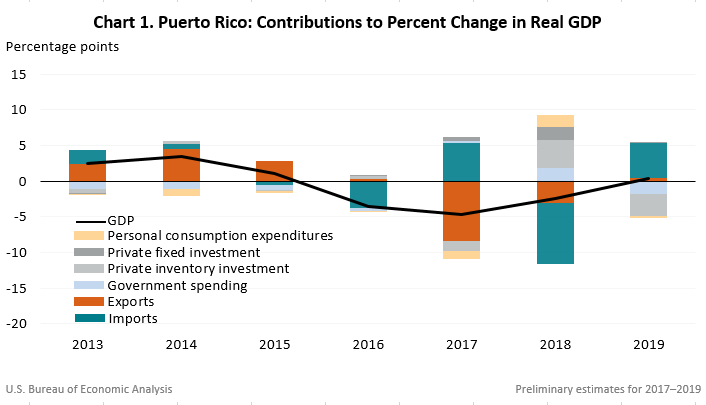 Pharmaceuticals and organic chemicals were the largest contributors to both the growth in exports and the decline in imports in 2019. Exports increased 0.7 percent, while imports decreased 9.1 percent. The primary contributor to the decrease in private inventory investment was the chemical manufacturing industry, which includes pharmaceutical manufacturers.

Government spending decreased 11.4 percent in 2019 as spending on disaster recovery activities slowed. The largest decline was in gross investment in structures by the central government as major repairs to the power grid, which was damaged in 2017 by Hurricanes Irma and Maria, were completed in 2018.

Puerto Rico GDP includes production owned by nonresidents, such as nonresident multinational enterprises. In Puerto Rico, subsidiaries of large nonresident multinational enterprises operate within the pharmaceutical manufacturing industry, as well as the medical device manufacturing and computer services industries. The Box in the Technical Note provides an update of research provided in 2020 that shows GDP excluding exports, imports, and inventory investment associated with these intellectual property-intensive industries.