Real gross domestic product (GDP) increased at an annual rate of 7.0 percent in the fourth quarter of 2021, following an increase of 2.3 percent in the third quarter. The increase was revised up 0.1 percentage point from the “advance” estimate released in January. The acceleration in the fourth quarter was led by an upturn in exports as well as accelerations in inventory investment and consumer spending. In the fourth quarter, COVID-19 cases resulted in continued restrictions and disruptions in the operations of establishments in some parts of the country. Government assistance payments in the form of forgivable loans to businesses, grants to state and local governments, and social benefits to households all decreased as provisions of several federal programs expired or tapered off. For more details, including source data, refer to the Technical Note and Federal Recovery Programs and BEA Statistics.

Quarterly GDP Highlights
The fourth quarter increase in real GDP primarily reflected increases in inventory investment, exports, consumer spending, and business investment that were partly offset by decreases in both federal and state and local government spending. Imports, which are a subtraction in the calculation of GDP, increased. 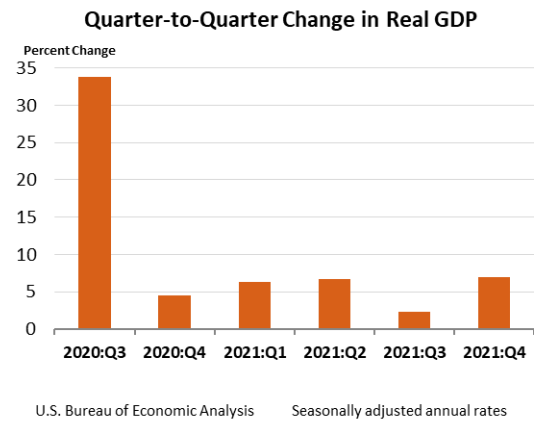 Quarterly Prices
Prices of goods and services purchased by U.S. residents increased 7.0 percent in the fourth quarter after increasing 5.6 percent in the third quarter. 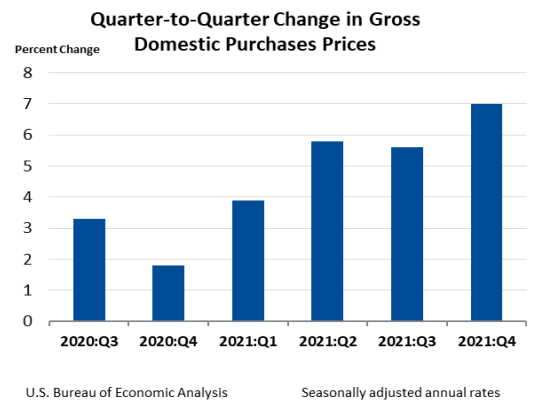 Year 2021 Highlights
Real GDP increased 5.7 percent (from the 2020 annual level to the 2021 annual level), unchanged from the prior estimate, in contrast to a decrease of 3.4 percent in 2020. The increase reflected increases in all major components: consumer spending, business investment, exports, housing investment, and inventory investment. Imports increased.