How accurate and reliable are BEA's early GDP estimates and revisions, and how have the revisions to GDP over time affected the picture of GDP growth?

For policymakers and businesses to better understand the economy and to formulate appropriate policies, up-to-date and accurate estimates of gross domestic product (GDP) and other important measures, such as the personal saving rate, are essential. BEA’s estimate release and revision schedule is designed to provide the most timely estimates possible while taking advantage of progressively more complete and more accurate source data as they become available from the Census Bureau, the Bureau of Labor Statistics, and other sources.

An overview of BEA’s revision processes and the source data are described in “Taking the Pulse of Economy: Measuring GDP,” by J. Steven Landefeld, Eugene P. Seskin, and Barbara M. Fraumeni in the Spring 2008 issue of the Journal of Economic Perspectives. The methodologies underlying the national accounts are described in detail in Concepts and Methods of the U.S. National Income and Product Accounts on the BEA Web site.

Periodically, BEA conducts studies to assess the accuracy of GDP—where accuracy is assessed by examining whether the successive vintages of the estimates present a consistent, general picture of the economy. While there is always a trade-off between timeliness and accuracy, these studies show that the early GDP estimates have struck an appropriate balance between the two, and early vintages of GDP present a useful picture of economic activity. They consistently indicate whether growth is positive or negative, whether growth is accelerating or decelerating, whether growth is high or low relative to the trend, and where the economy is in relation to the business cycle. Further, the magnitude of the revisions to the early estimates tends to be small.

A recent study published in the August 2014 Survey of Current Business found that the revisions to GDP over time do not significantly affect the picture of GDP growth.

The following charts are based on GDP data that were published as part of 2013 comprehensive revision of the national economic accounts on July 31, 2013.

More information on the annual and comprehensive revisions of the national income and product accounts is available at www.bea.gov/national/index.htm. 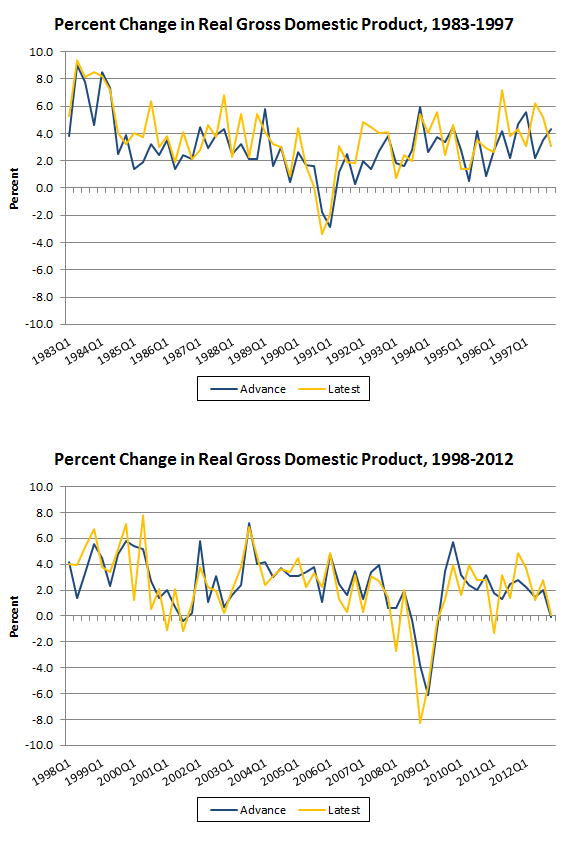