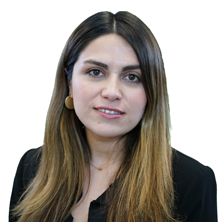 Geographic analysis of consumption is often constrained by geographic borders such as counties, but economic agents often cross borders to consume. Using unique card transaction data, we estimate across-county spending flows between firms and consumers for every county in the United States and for 15 industries to provide a new consumption-link across counties that has not been previously studied. To demonstrate the importance of this consumption link, we reexamine the 2007–2009 Great Recession following the work of Mian and Sufi (2013) and Mian, Rao, and Sufi (2014), who demonstrate that counties with the greatest decline in housing net worth also had the largest declines in consumption and employment. We show that the effect of the housing wealth decline crosses borders to affect consumption and employment in a pattern consistent with our spending flows, even for the non-tradable sector. We find that not accounting for cross-border effects tends to understate the impact of local housing wealth shocks on employment and spending by 26 and 17 percent, respectively; it also misallocates where those effects are occurring, by about 11 percent for both spending and employment.