The following are 2011 advance and 2010 revised summary estimates of the employment, capital expenditures, and sales activity of U.S. multinational companies (comprising both their U.S. and foreign operations) and the corresponding activity of foreign multinational companies in the United States. Preliminary 2011 and revised 2010 statistics based on more complete source data and including country and industry detail will be released later this year.1

Changes in the share of MNC activity at the U.S. parent do not necessarily indicate production shifting between U.S. parents and their foreign affiliates. Other factors that may be associated with changes in the share include different rates of economic growth in the United States and in specific markets where investment is occurring abroad, or the creation of new market opportunities abroad that cannot be served by exports from the United States. These issues are discussed in annual articles on U.S. MNC operations in the Survey of Current Business.4

12010 preliminary statistics with country and industry detail are available on BEAs Web site.
2 Statistics for total U.S private-industry employment are from BEAs national income and product accounts, table 6.4D: Full-Time and Part-Time Employees by Industry (see /iTable/index_nipa.cfm).
3 An MNC-wide total for sales is not provided because it would contain duplication resulting from transactions among and within MNCs.
4 See U.S. Multinational Companies: Operations of U.S. Parents and Their Foreign Affiliates in 2010 in the November 2012 issue of the Survey. Additional discussion of data and analytical considerations may be found in A Note on Patterns of Production and Employment by U.S. Multinational Companies, in the March 2004 issue of the Survey.

Each year, the Bureau of Economic Analysis releases advance summary statistics of employment, sales, and capital expenditures by U.S. parent companies, by their foreign affiliates, and by U.S. affiliates of foreign MNCs. Statistics based on more complete source data, including country and industry detail, will be released later this year.

For both U.S. MNCs and U.S. affiliates of foreign MNCs, employment covers the total number of full-time and part-time employees on the payroll at the end of the year. Sales cover gross sales minus returns, allowances and discounts, or gross operating revenues. Capital expenditures cover total expenditures on property, plant, and equipment (that is, expenditures for land and depreciable structures and equipment); they are gross of any sales, retirements, or transfers of previously owned tangible assets. Capital expenditures include spending for equipment that is leased or rented to others, which in some industriessuch as automotive equipment rental and leasingcan be very large. The value of sales, retirements, or transfers in these industries can be very large.

In addition to presenting data collected directly in its surveys of MNC operations, BEA uses data collected on costs incurred and profits earned in production to estimate the value added of U.S. parent companies, of majority-owned foreign affiliates, and of majority-owned U.S. affiliates of foreign companies. Value added, which is not discussed in this release, is an important measure of MNC activity that indicates the contribution of parents or affiliates to gross domestic product in the United States or in foreign host countries. The latest statistics for the value added are for 2010 and are available on BEAs website at /iTable/index_MNC.cfm. 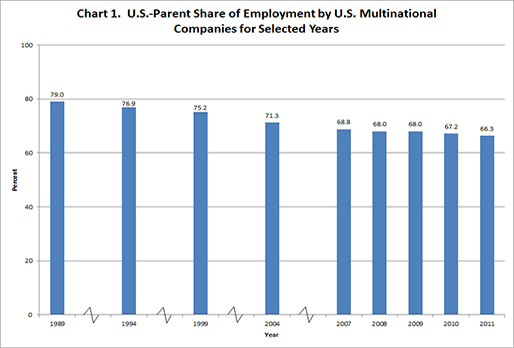