These data have been superseded. Please see our latest releases for current estimates and contact information.
Explore Product View
BEA 14—39

Today, the U.S. Bureau of Economic Analysis released prototype statistics of quarterly gross domestic product (GDP) by state for 2005–2013. These new statistics provide a more complete picture of economic growth across states that can be used with other regional data to gain a better understanding of regional economies as they evolve from quarter to quarter.

The new data provide a fuller description of the accelerations, decelerations, and turning points in economic growth at the state level, including key information about changes in the distribution of industrial infrastructure across states. These prototype statistics are released for evaluation and comment by data users.

"As 'America's Data Agency,' the Commerce Department is committed to making more of its rich data available in a more accessible way," said U.S. Secretary of Commerce Penny Pritzker. "The new regional economic statistics BEA released today provide more timely snapshots of each state's economic health. The report is just one example of how the Commerce Department is working to provide businesses, entrepreneurs, taxpayers, and policymakers with the latest economic intelligence to inform their decision making."

"You often hear about how the U.S. economy performed in a given quarter. Now you will be able to see how each state did. BEA's new regional data is timely, innovative and relevant – a trifecta in the Commerce Department's data development business," said Mark Doms, Under Secretary of Commerce for Economic Affairs.

The quarterly GDP by state statistics are released for 21 industry sectors and are released in both current dollars and inflation-adjusted chained (2009) dollars. 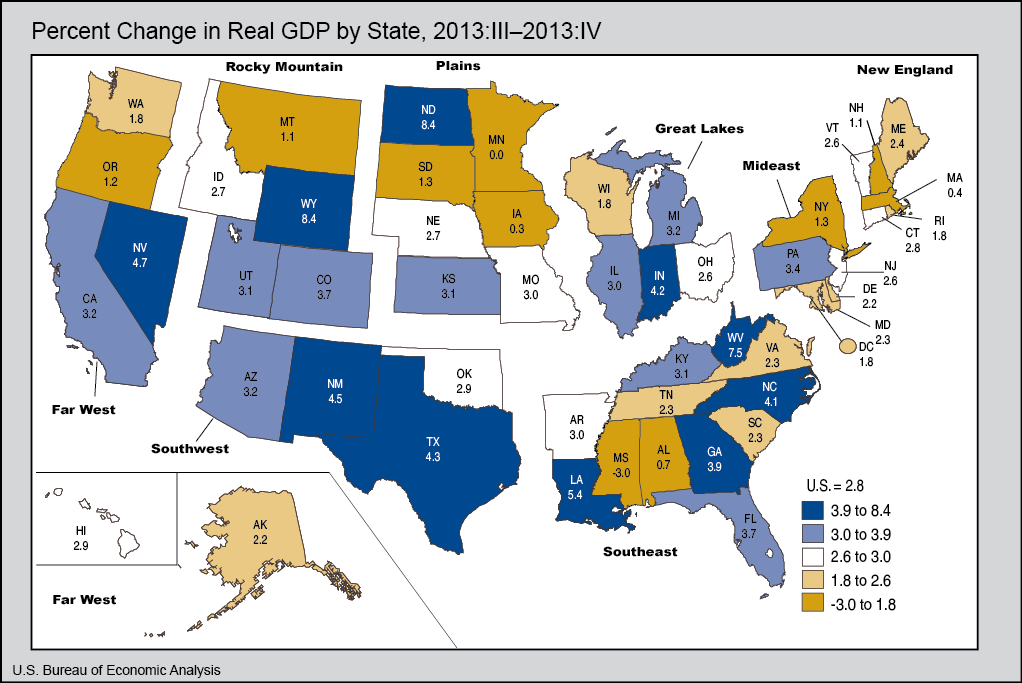 Construction subtracted from growth in 47 states and the District of Columbia in the fourth quarter of 2013. This industry declined 5.9 percent and subtracted 0.22 percentage point from growth in the nation. Mississippi was the only state with small positive contributions to growth from the construction sector in all four quarters.

Next Steps. BEA plans additional outreach with data users to assess these prototype statistics. Subject to data users' evaluations and comments, we plan to review the estimation methodology and continue to incorporate improved data sources. Provided that user evaluations are positive, we plan to release official statistics in 2015.

Availability of Data on BEA Website. Prototype statistics of current-dollar and real GDP for each state and for the 21 industry sectors may be found on BEA's Regional Accounts webpage.

More information on the statistics and the methodology will appear in an article in an upcoming issue of the Survey of Current Business, the monthly online journal of the Bureau of Economic Analysis.

Definitions. GDP by state is the state counterpart of the Nation's gross domestic product (GDP), the Bureau's featured and most comprehensive measure of U.S. economic activity. GDP by state is derived as the sum of the GDP originating in all the industries in a state.

Relation of GDP by State to U.S. Gross Domestic Product (GDP). An industry's GDP by state, or its value added, in practice, is calculated as the sum of incomes earned by labor and capital and the costs incurred in the production of goods and services. That is, it includes the wages and salaries that workers earn, the income earned by individual or joint entrepreneurs as well as by corporations, and business taxes such as sales, property, and Federal excise taxes--that count as a business expense.

GDP is calculated as the sum of what consumers, businesses, and government spend on final goods and services, plus investment and net foreign trade. In theory, incomes earned should equal what is spent, but due to different data sources, income earned, usually referred to as gross domestic income (GDI), does not always equal what is spent (GDP). The difference is referred to as the "statistical discrepancy."

Quarterly GDP by state for the U.S. differs from the GDP in the national income and product accounts (NIPAs) and thus from the Annual Industry Accounts' GDP by industry, because the U.S. GDP by state excludes federal military and civilian activity located overseas, which cannot be attributed to a particular state.

BEA's national, international, regional, and industry estimates; the Survey of Current Business; and BEA news releases are available without charge on BEA's Web site at www.bea.gov. By visiting the site, you can also subscribe to receive free e-mail summaries of BEA releases and announcements.