These data have been superseded. Please see our latest releases for current estimates and contact information.
Explore Product View
BEA 19-40

UTULEI, AMERICAN SAMOA (August 23, 2019) -- Today, the Bureau of Economic Analysis (BEA) is releasing estimates of gross domestic product (GDP) for American Samoa for 2018, in addition to estimates of GDP by industry and compensation by industry for 2017. These estimates were developed under the Statistical Improvement Program funded by the Office of Insular Affairs (OIA) of the U.S. Department of the Interior. 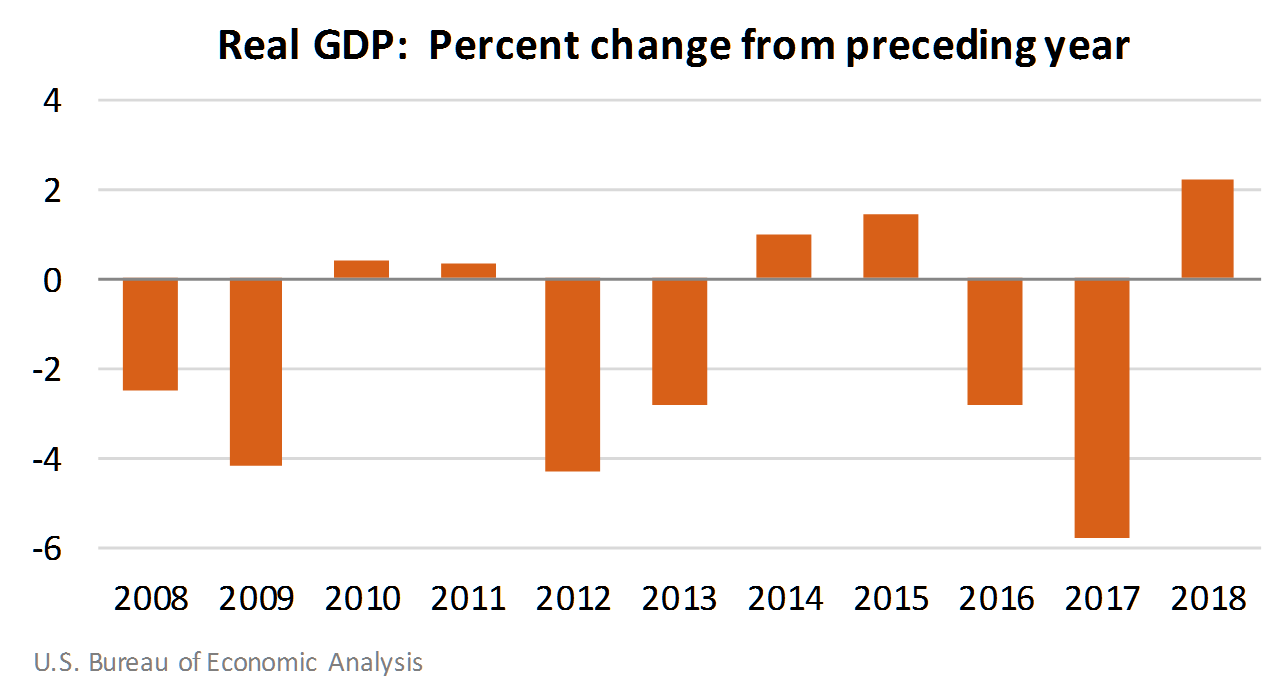 The growth in the American Samoa economy reflected increases in private fixed investment and in exports of goods that were partly offset by a decrease in inventory investment (see Table 1.4).

Private fixed investment increased 7.7 percent, largely due to reconstruction and major repairs of homes and businesses that were destroyed or heavily damaged from Tropical Cyclone Gita.

Exports of goods increased 15 percent, primarily reflecting an increase in exports of canned tuna and related products. This growth was partly offset by a decrease in inventory investment, as the canning industry drew down inventories to support expanded production.

The estimates of GDP by industry for American Samoa show that the private sector and government sector contracted in 2017 (see Table 2.4). The decline in the private sector reflected a decrease in output of the cannery industry, following the closure of one of two canneries. Output of nonmanufacturing industries, including construction, also decreased. The decline in the government sector primarily reflected a decrease in territorial government employment and compensation.

The compensation by industry estimates, which are measured in current dollars, show trends in compensation for major industries (see Table 2.6). Total compensation decreased in 2017, reflecting decreases across all industries shown.

Estimates for 2015 to 2017 that were released on August 24, 2018 have been revised in order to incorporate improvements to source data, including:

BEA will conduct a comprehensive update of GDP for American Samoa next year. Estimates of GDP will be revised to reflect methodological improvements and the availability of more complete data over time, in some cases back to 2002. Information from the Census Bureau’s 2017 Economic Census of Island Areas, the most comprehensive industry data available for American Samoa and the other island areas, will be incorporated at this time. BEA currently plans to release these estimates, in addition to new GDP estimates for 2019, in the summer of 2020. GDP by industry and compensation by industry estimates for 2018 will also be released.

Quantities and prices. Quantities, or "real" volume measures, and prices are expressed as index numbers with a specified reference year equal to 100 (currently 2009). Quantity and price indexes are calculated using a Fisher chain-weighted formula that incorporates weights from two adjacent years. "Real" dollar series are calculated by multiplying the quantity index by the current-dollar value in the reference year (2009) and then dividing by 100.