These data have been superseded. Please see our latest releases for current estimates and contact information.
Explore Product View
BEA 19-53

SAN JUAN, PUERTO RICO (October 15, 2019) -- Today, the Bureau of Economic Analysis (BEA) released prototype statistics for personal consumption expenditures, private fixed investment, and net exports of goods for Puerto Rico. These annual statistics cover the time period from 2012 to 2017. In conjunction with this release, BEA is requesting feedback to refine the data sources and methods used to prepare these statistics.

The estimates released today are a major step toward the goal of producing gross domestic product (GDP) statistics for Puerto Rico that are consistent with international guidelines and that are directly comparable to data for other U.S. territories, states, the nation, and many other countries.1

These statistics—which apply the most up-to-date source data and methodology available to BEA—can be used to understand Puerto Rico's economic trends and support economic development strategies, particularly as the island continues its recovery from Hurricanes Irma and Maria.

Highlights from this initial set of Puerto Rico statistics are below.

The largest decreases in real consumer spending occurred in 2014 and 2017 (see Table 1.3). In 2014, as wages dropped and consumer prices continued to increase, residents reduced their spending on both goods and services. The declines within goods were widespread; the largest decreases were for motor vehicles and "other" nondurable goods, which includes items such as medicine and clothing. In 2017, Hurricanes Irma and Maria caused catastrophic damage that restricted residents' access to many goods and services. The decreases in health care, housing and utilities, and "other" services (including education services) were especially large. 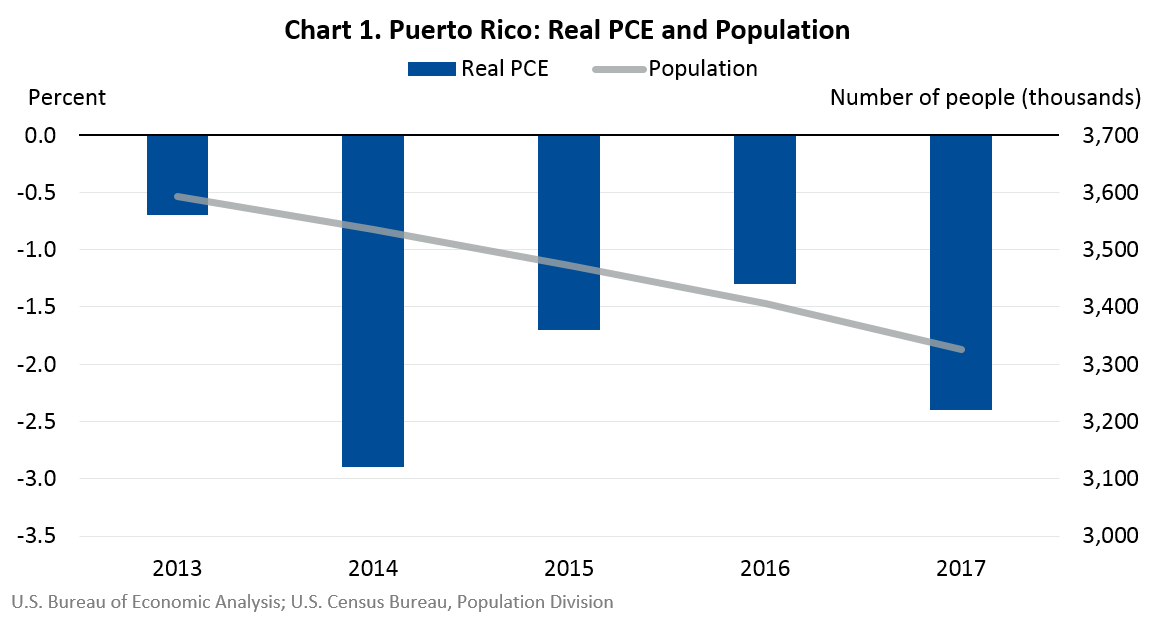 In 2017, spending on nonresidential structures increased, reflecting the rebuilding of commercial properties in the months following Hurricanes Irma and Maria. In contrast, spending on residential structures decreased, reflecting the continued drop in demand for homes consistent with the downward trend in the population, coupled with an even further decline after the hurricanes. 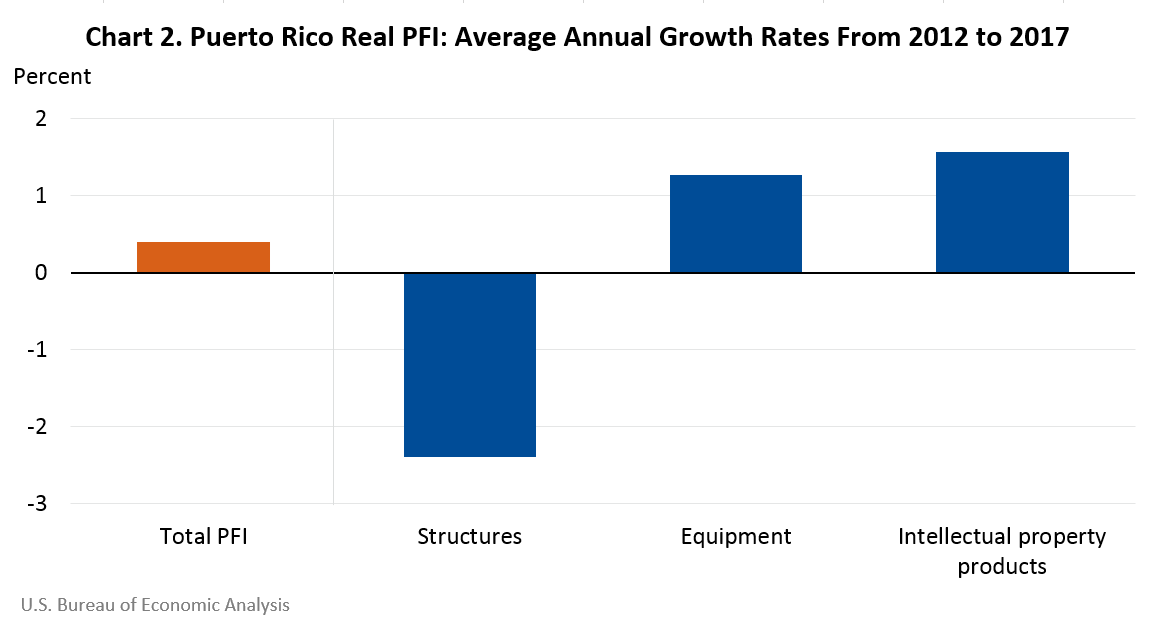 The trade balance in goods—the difference between exports and imports—was positive for all years from 2012 to 2017. The surplus ranged from $12.4 billion in 2012 to $28.6 billion in 2015 (see Table 3.1). Chart 3 shows the trade surplus, in addition to total exports and total imports of goods. 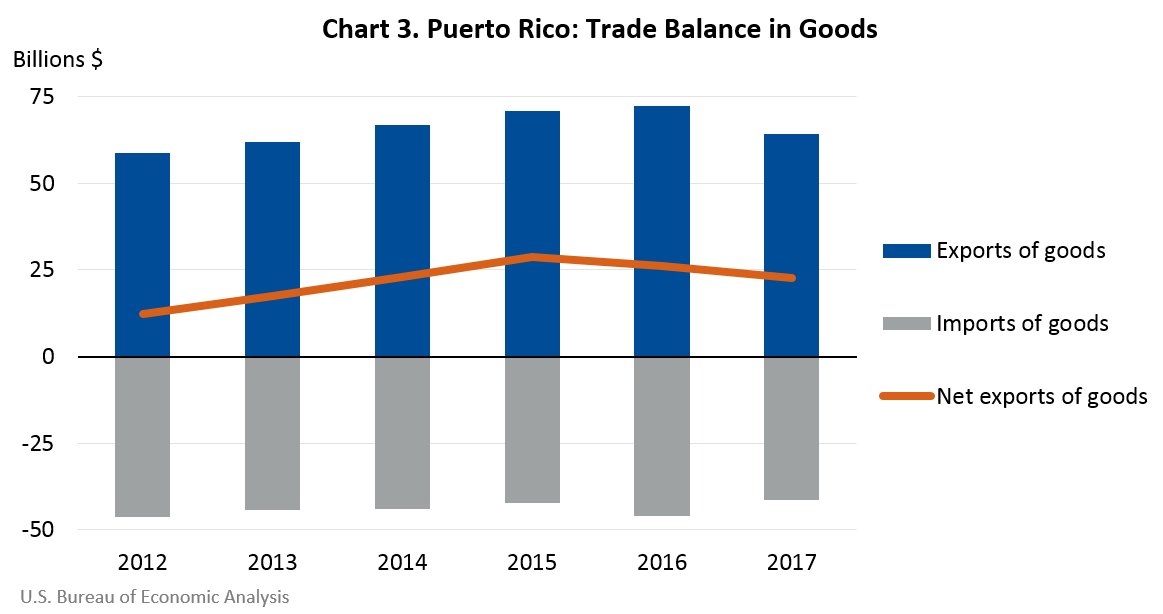 The majority of exported goods, approximately 74 percent over this period, were pharmaceuticals and organic chemicals.3 Other significant exports were medical devices and equipment—which are embedded within consumer goods and within capital goods—and food and beverages.

Real exports of goods grew from 2012 to 2015; the highest growth was in 2014 (see Table 3.3). The increase in 2014 reflected growth of over 50 percent in consumer goods excluding food, autos, and pharmaceuticals. The growth in this series was due to a large increase in exports of implanted or worn medical appliances. Real exports turned down in 2016 and then decreased 14.4 percent in 2017, reflecting the effects of the September hurricanes on the manufacturing sector.

The public is invited to submit comments by emailing territories@bea.gov. Feedback will be used to help improve the data sources and methodology used in preparing these statistics.

Because Puerto Rico is not included in most of the major surveys used by BEA to estimate U.S. GDP, the support and assistance provided by the government of Puerto Rico will be critical to the successful production of these estimates.

1  BEA currently produces similar economic data, and GDP, for American Samoa, the Commonwealth of the Northern Mariana Islands (CNMI), Guam, and the U.S. Virgin Islands, under an agreement with the Office of Insular Affairs of the U.S. Department of the Interior. Historical time series of these estimates can be accessed at BEA's GDP for the U.S. Territories.
2  PCE also includes expenses of nonprofit institutions serving households.
3  Also includes medicinal and dental products.