Arts and Cultural Production Satellite Account, U.S. and States
New statistics for 2018 and 2019; prior years updated

The Arts and Cultural Production Satellite Account released today by the U.S. Bureau of Economic Analysis (BEA) shows that arts and cultural economic activity, adjusted for inflation, increased 3.7 percent in 2019 after increasing 2.3 percent in 2018 (table 1). Arts and cultural economic activity accounted for 4.3 percent, or $919.7 billion, of current-dollar gross domestic product (GDP), in 2019 (tables 2 and 3). 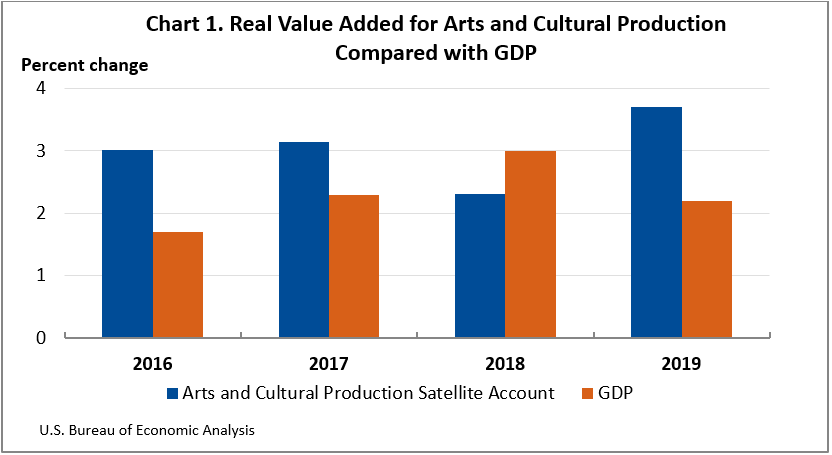 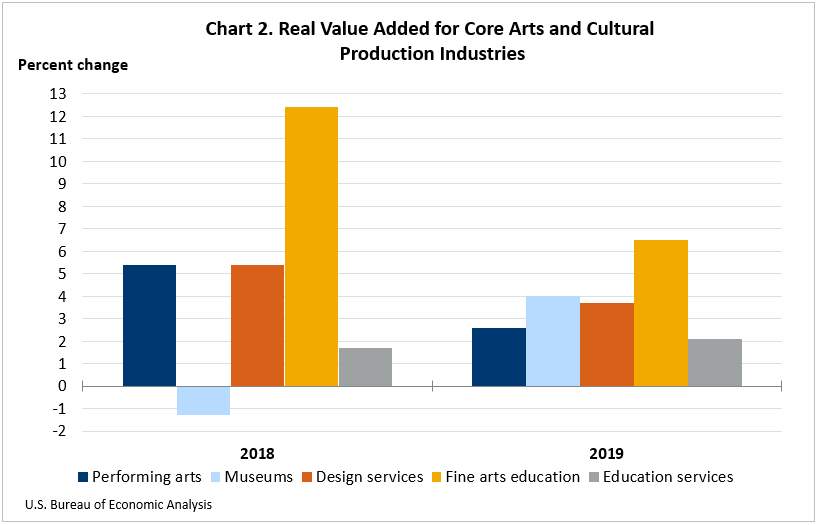 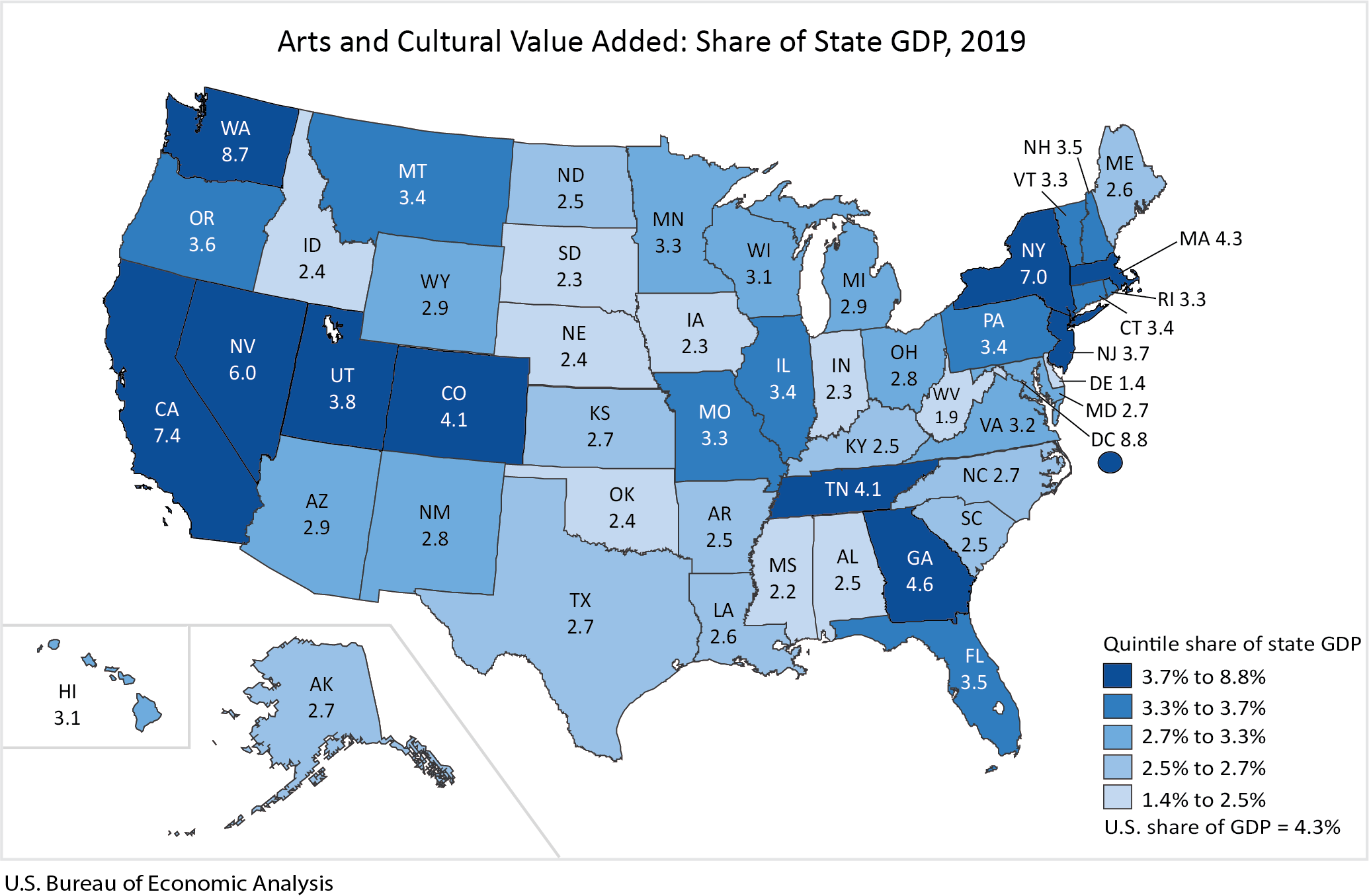 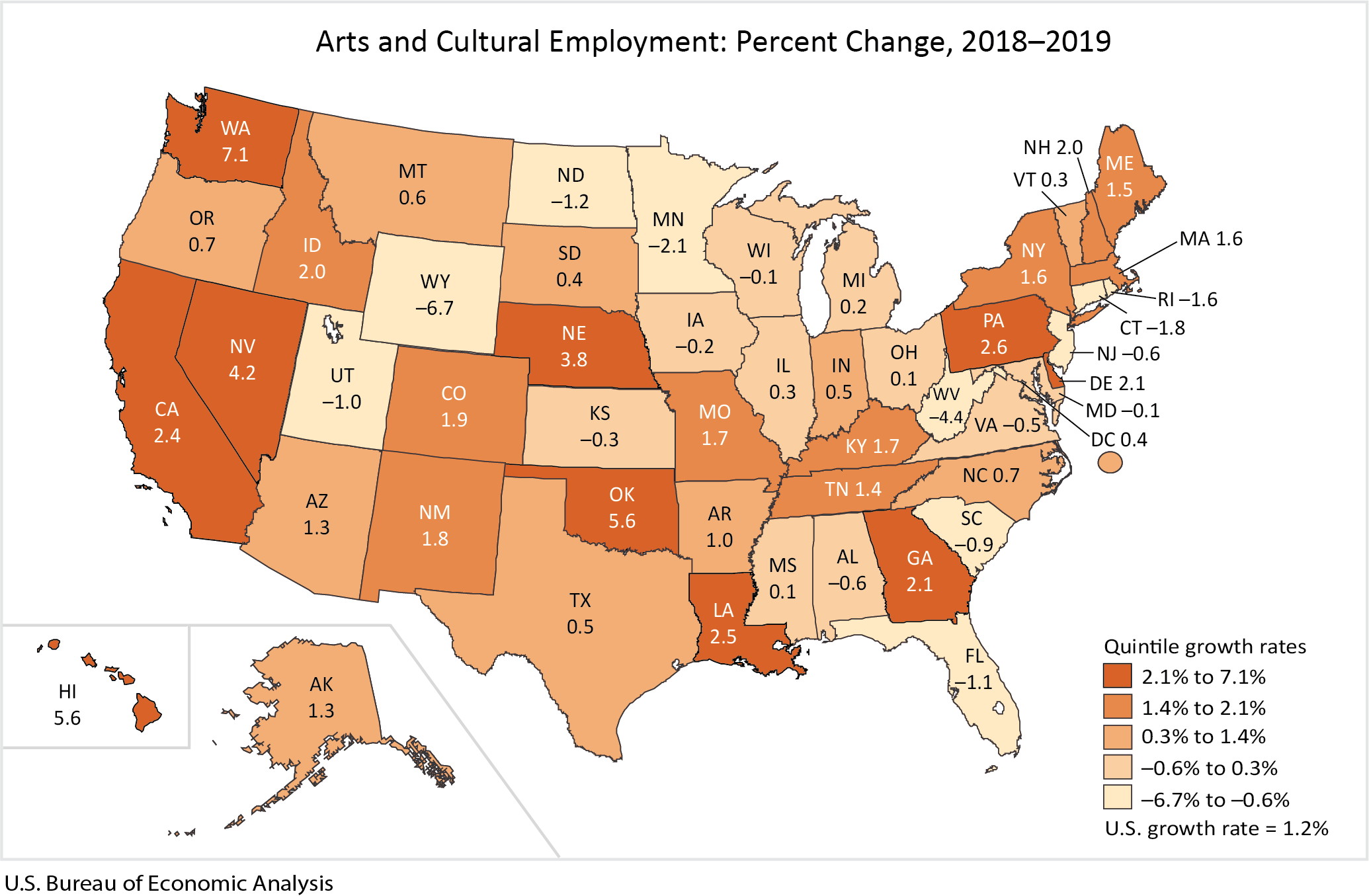 BEA's Arts and Cultural Production Satellite Account is supported by funding from the National Endowment for the Arts.

Defining 'culture' in the context of input-output tables for the Arts and Cultural Production Satellite Account. Culture can be defined in a variety of ways, including language, traditions, beliefs, and values. For this account, arts and cultural production is defined narrowly to include creative artistic activity—the goods and services produced by it, the goods and services produced in support of it, and the construction of buildings in which it takes place.

The input-output table is a valuable tool to identify and estimate the value of the "creative chain." This chain captures the economic value of the creation of a cultural product (composing a symphony) from its production (the performance being recorded in a studio), distribution (by various modes), and final consumption (by the listener).

Value added. Arts and cultural production value added consists of output less intermediate consumption (for example, costumes rented by performing arts companies or printing of the program for the show).

Current-dollar estimates are valued in the prices of the period when the transactions occurred—that is, at "market value." Also referred to as "nominal estimates" or "current-price estimates."

Quantities and prices. Quantities, or "real" measures, and prices are expressed as index numbers with a specified reference year equal to 100 (currently 2012). Quantity and price indexes are calculated using a Fisher-chained weighted formula that incorporates weights from two adjacent periods (quarters for quarterly data and annuals for annual data). "Real" dollar series are calculated by multiplying the published quantity index by the current-dollar value in the reference year (2012) and then dividing by 100. Percent changes calculated from chained-dollar levels and quantity indexes are conceptually the same; any differences are due to rounding.

Chained-dollar values are not additive, because the relative weights for a given period differ from those of the reference year. In tables that display chained-dollar values, the value of the "Not allocated by industry" line reflects the difference between the first line and the sum of the most detailed lines. For the real value added by industry table, this value also reflects differences in source data used to estimate GDP by industry and the expenditures measure of real GDP.

Table 3. Industry Contributions to the Arts and Cultural Production Share of GDP, 2019

Table 8. Arts and Cultural Production Employment and Compensation by State, 2019