Today, the Bureau of Economic Analysis (BEA) is releasing estimates of gross domestic product (GDP) for Guam for 2019, in addition to estimates of GDP by industry and compensation by industry for 2018.1 These estimates were developed under the Statistical Improvement Program funded by the Office of Insular Affairs (OIA) of the U.S. Department of the Interior.

The estimates of GDP for Guam show that real GDP—GDP adjusted to remove price changes—increased 2.0 percent in 2019. 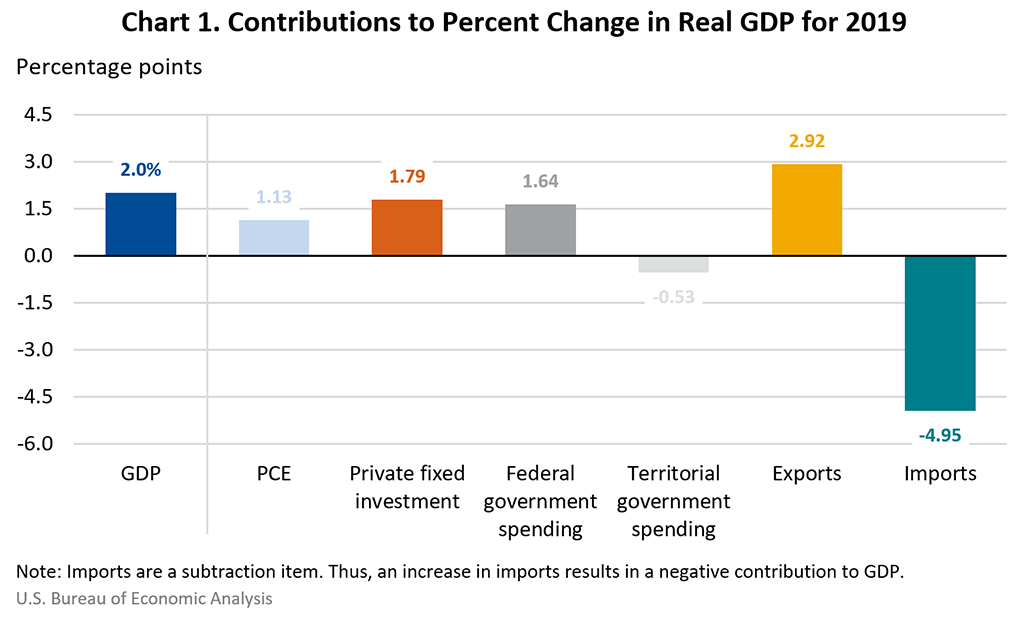 Exports of services, which consists primarily of spending by tourists, increased 15.6 percent (see Table 1.3). This reflected a record high in visitor arrivals for the year and growth in average spending by Korean and Japanese tourists, who make up much of Guam's tourist market.

The estimates of GDP by industry show that the government sector was the source of the decline in real GDP in 2018 (see Table 2.4). Federal and territorial government decreased, reflecting declines in employment and hours paid.

The private sector expanded in 2018, partly offsetting the decrease in the government sector. The largest contributor to private sector growth was construction, reflecting growth in private sector work on defense projects.3

This release also includes the results of a comprehensive update of the territorial economic accounts. Comprehensive updates are typically performed every 5 years, based on the Census Bureau's every-5-years economic censuses of island areas.

Chart 2 shows that the new estimates exhibit a pattern of inflation-adjusted GDP growth similar to the previously published estimates. However, there are notable revisions within the components of GDP, including to consumer spending and private fixed investment.

The revisions to consumer spending primarily reflect the incorporation of an improved estimation method for health care services for all years. Previously, estimates for health care services provided to households, including by hospitals, were benchmarked every 5 years to ECIA data on total revenues. Now, services provided by the government hospital are estimated for all years using annual data on net patient revenues from financial statements. For 2015 forward, CMS cost report data on net patient revenues of private sector hospitals are used for the first time.5 The cost report data replaced estimates of private sector services that had been extrapolated based on payroll data. The effect of the updated estimation method on the growth of GDP was largest for 2015 forward, as the newly incorporated CMS data showed a different pattern of growth than payroll data.

OIA and BEA will work to extend and improve the estimates of GDP for Guam. The information provided by the Guam government will continue to be critical to the successful production of these estimates.

2 Health care services include those directly financed by government social benefits such as Medicaid.

3 Construction activities performed by private companies on behalf of the government sector are reflected within private sector industry value added.

4 "Other private" includes all private sector industries not separately shown in Table 2.6, such as professional, scientific, and technical services and health care services.

5 Guam's first private sector hospital opened in July 2015. Revenues for the first half-year of operation were prorated based on 2016 data from CMS.

6 The estimates of private fixed investment are benchmarked to capital expenditures information from the 2012 ECIA.

Personal consumption expenditures (PCE), also referred to as "consumer spending," measures the goods and services purchased by "persons"—that is, by households and by nonprofit institutions serving households (NPISHs)—who are resident in Guam.

Quantities and prices. Quantities, or "real" volume measures, and prices are expressed as index numbers with a specified reference year equal to 100 (currently 2012). Quantity and price indexes are calculated using a Fisher chain-weighted formula that incorporates weights from two adjacent years. "Real" dollar series are calculated by multiplying the quantity index by the current-dollar value in the reference year (2012) and then dividing by 100.