Today's release also reflects updated statistics for 2014–2019. Gross output, value added, employment, and compensation were updated to include the results of the 2021 annual update of the National Economic Accounts, which includes the Industry Economic Accounts. The updated statistics reflect newly available and revised source data as well as methodological improvements.

Marine economy estimates, including tourism and recreation estimates, were impacted by the response to the spread of COVID–19 in 2020, as governments issued and lifted "stay-at-home" orders. This led to rapid changes in demand, as consumers canceled, restricted, or redirected their spending. The U.S. government passed several laws to support and sustain businesses and individuals through the pandemic. The full economic effects of the COVID–19 pandemic cannot be quantified in the marine economy estimates because the impacts are generally embedded in source data and cannot be separately identified. For more information, refer to "Federal Recovery Programs and BEA Statistics."

MESA real gross output–principally a measure of the marine economy's inflation-adjusted sales or receipts, which includes sales to final users in the economy (GDP) and sales to other industries (intermediate inputs)–decreased $57.3 billion in 2020 (table 7). Marine economy activity highlights for 2020 include the following: 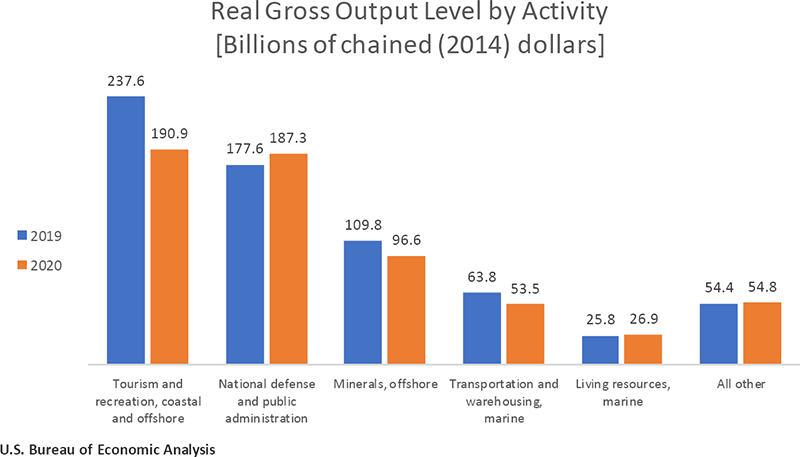 Marine economy industry highlights for 2020 include the following: 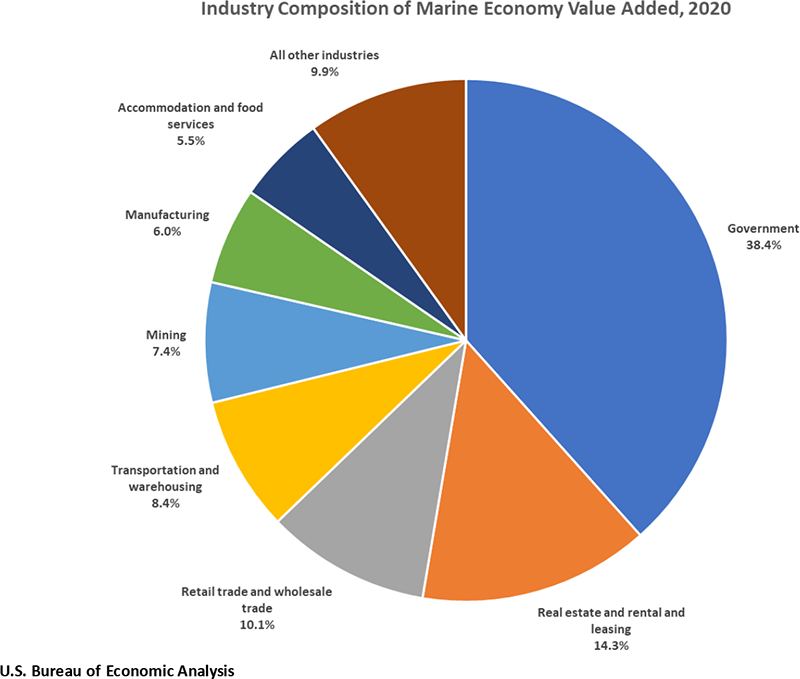 The Marine Economy Satellite Account measures the economic activity associated with the marine economy, identifies the industries responsible for producing these goods and services, and measures the output, value added, compensation, and employment associated with that production. Like other BEA satellite accounts, the MESA was built on BEA's comprehensive supply-use framework. The supply-use tables provide a detailed look at the relationships among industries and how each industry contributes to GDP. In practice, the MESA is a rearrangement of the published supply-use tables with new estimation methods that isolate marine-related spending and production. A variety of private and public data sources were used to identify marine-related spending and production to develop the MESA estimates.

An important feature of the MESA is the presentation of estimates of gross output and value added by marine economic activity, in addition to the traditional presentation of estimates by industry. This allows for the marine economy to be better analyzed in areas where significant economic activity occurs across a variety of traditional industries. For example, the marine tourism and recreation activity spans a variety of traditional industries, which can create difficulties when attempting to analyze the magnitude and growth of marine tourism and recreation. By presenting the statistics by activity, the MESA allows for a more focused examination of marine economic activity in the United States.

The geographic scope of the MESA includes the Atlantic, Pacific, and Arctic Oceans within the Exclusive Economic Zone (approximately 200 nautical miles off the U.S. coast) as well as marginal seas, such as the Gulf of Mexico, Chesapeake Bay, Puget Sound, Long Island Sound, San Francisco Bay, and others. Also included is the U.S. shoreline directly along these bodies of water. Furthermore, the Great Lakes are included up to the international boundary with Canada.

For additional information on the marine economy statistics as well as the data sources and methodology that underlie their preparation, refer to Defining and Measuring the U.S. Ocean Economy.

The Marine Economy Satellite Account was produced in partnership with the National Oceanic and Atmospheric Administration.

Current-dollar estimatesare valued in the prices of the period when the transactions occurred—that is, at "market value." Also referred to as "nominal estimates" or as "current-price estimates."

MESA employment consists of all full-time, part-time, and
temporary wage-and-salary jobs where the workers are engaged in the production of marine economy goods and
services. Self-employed individuals are excluded from employment totals.

MESA compensation consists of the pay to employees (including wages and salaries and benefits such as employer contributions to pension and health funds) in return for their marine economy-related work during a given year. Pay to the self-employed is excluded from compensation but included in value added.

MESA value added (also referred to as GDP) consists of the value of marine economy goods and services produced less the value of expenses incurred for their production. The activity of self-employed individuals is included in value added.