Today, the Bureau of Economic Analysis released prototype statistics for personal consumption expenditures, private fixed investment, and net exports of goods for Puerto Rico. These annual statistics cover the time period from 2012 to 2017.

The estimates released today are a major step toward the goal of producing gross domestic product (GDP) statistics for Puerto Rico that are consistent with international guidelines and that are directly comparable to data for other U.S. territories, states, the nation, and many other countries. 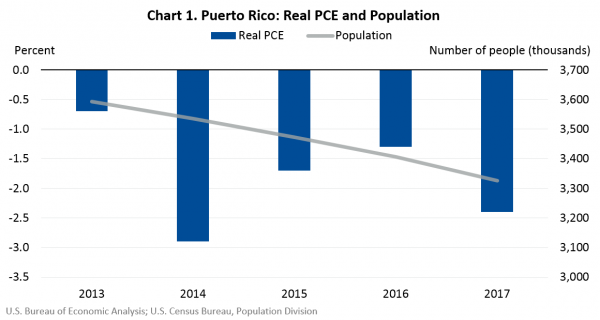 The majority of exported goods, approximately 74 percent over this period, were pharmaceuticals and organic chemicals. Other significant exports were medical devices and equipment—which are embedded within consumer goods and within capital goods—and food and beverages.

The public is invited to submit comments by emailing territories@bea.gov. Feedback will be used to help improve the data sources and methodology used in preparing these statistics. For more information, read the full report.