Today, the Bureau of Economic Analysis (BEA) is releasing estimates of gross domestic product (GDP) for the Commonwealth of the Northern Mariana Islands (CNMI) for 2019, in addition to estimates of GDP by industry and compensation by industry for 2018.  These estimates were developed under the Statistical Improvement Program funded by the Office of Insular Affairs (OIA) of the U.S. Department of the Interior.

Gross Domestic Product for 2019
The estimates of GDP for the CNMI show that real GDP—GDP adjusted to remove price changes— decreased 11.2 percent in 2019 after decreasing 19.3 percent in 2018. The decrease in real GDP reflected decreases in exports and private fixed investment. These decreases were partly offset by an increase in government spending. 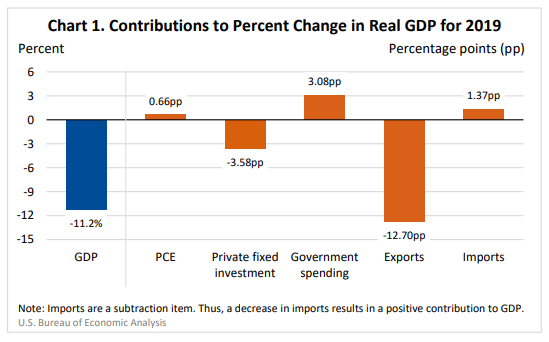 Exports of goods and services was the primary driver of the decline in real GDP. The decrease in exports was accounted for by exports of services, which decreased 27.7 percent. Visitor spending, including on casino gambling, declined in 2019. Statistics published by the CNMI government showed that the number of visitor arrivals to the CNMI decreased 5.9 percent. According to publicly available financial statements, revenues from casino gambling dropped over 80 percent.