Today, the Bureau of Economic Analysis (BEA) is releasing estimates of gross domestic product (GDP) for the Commonwealth of the Northern Mariana Islands (CNMI) for 2019, in addition to estimates of GDP by industry and compensation by industry for 2018.1  These estimates were developed under the Statistical Improvement Program funded by the Office of Insular Affairs (OIA) of the U.S. Department of the Interior.

The estimates of GDP for the CNMI show that real GDP—GDP adjusted to remove price changes—decreased 11.2 percent in 2019 after decreasing 19.3 percent in 2018 (table 1.3).

As shown in chart 1, the decrease in real GDP reflected decreases in exports and private fixed investment. These decreases were partly offset by an increase in government spending.

Exports of goods and services was the primary driver of the decline in real GDP. The decrease in exports was accounted for by exports of services, which decreased 27.7 percent. Visitor spending, including on casino gambling, declined in 2019. Statistics published by the CNMI government showed that the number of visitor arrivals to the CNMI decreased 5.9 percent. According to publicly available financial statements, revenues from casino gambling dropped over 80 percent.

There is often interest in how much a specific GDP component contributes to the change in real GDP. BEA publishes this measure in news release table 1.4. Chart 1 shows both the percent change of total real GDP and the contributions (in percentage points) of each major component to that change. For example, exports of goods and services accounted for -12.70 percentage points of the 11.2 percent decrease in real GDP in 2019. This means that, all else equal, had exports neither increased nor decreased in 2019, real GDP would have increased 1.5 percent.

The estimates of GDP by industry for the CNMI show that the private sector was the source of the decline in real GDP in 2018 (table 2.5). The decline was more than accounted for by the accommodations, food services, and amusement sectors, reflecting the drop in tourism and output of the casino industry.

The compensation by industry estimates, which are measured in current dollars, show trends in compensation for major industries (table 2.6). Total compensation increased in 2018, reflecting growth in all industries shown except manufacturing. The largest contributor was the territorial government. Government financial statements for the Commonwealth and its independent agencies show that wages increased in fiscal year 2018.

This release also includes the results of a comprehensive update of the territorial economic accounts. Comprehensive updates are typically performed every 5 years, based on the Census Bureau’s every-5-years economic censuses of island areas.

Chart 2 shows that the revised estimates exhibit a pattern of inflation-adjusted GDP growth similar to the previously published estimates. However, there are notable revisions within the components of GDP, including to imports, consumer spending, and private fixed investment. 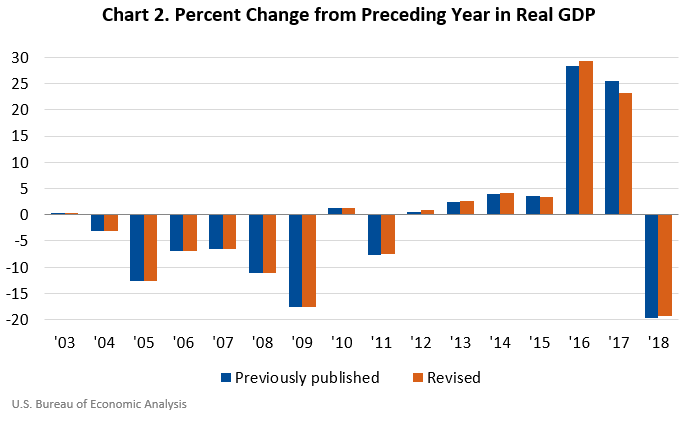 For example, consumer spending increased more than previously estimated between 2012 and 2017, reflecting the incorporation of 2017 ECIA data on sales to resident households.

Private fixed investment also increased more than previously estimated over this period, reflecting the incorporation of 2017 ECIA data on capital expenditures by private businesses and of construction in progress data collected from casino financial statements.

Comparisons of these updated estimates of consumer spending and private investment with ECIA and CNMI government data on business revenues showed that many of the goods and services purchased by households and businesses in the CNMI were produced outside of the islands. Thus, imports, which are a subtraction in the calculation of GDP, were also revised upward.