New Data on the Sources of Economic Growth

BEA and the Bureau of Labor Statistics have updated and expanded their joint data set showing sources of growth or decline in industries and how those sources affect the U.S. economy overall. New detail was added about the contributions of information technology and other types of capital assets.

The U.S. integrated industry-level production account was updated in March with new estimates for 2019 and updated estimates for 1987-2018. This data set presents a bottom-up picture of the sources of economic growth that can be used to study structural changes in the U.S. economy, globalization, the impact of new technologies, and the origins of productivity growth.

The account integrates data from BEA and BLS to show the contributions of capital, labor, and productivity to industries’ outputs and gross domestic product. This is sometimes called "KLEMS" data, for the broad categories of inputs used by industries (K=capital, L=labor, E=energy, M=materials, and S=purchased services).

This year’s update of the account includes experimental data that expand the number of capital asset groups from five to nine. The information technology group was split into communications equipment and computer hardware. The “other” assets group was divided into instruments and other office equipment; transportation equipment; other equipment; and structures, land, and inventories. The remaining groups are research and development, software, and entertainment originals.

The new detail on capital inputs is useful for understanding growth across industries. For example, during 1987-2019, the largest contribution of IT capital assets to gross output growth was in the broadcasting and telecommunications industry, accounting for 1.45 percentage points out of the industry’s average annual growth of 4.55 percent. The newly available detail shows that 1.23 percentage points of the contribution from IT are explained by communications equipment, while 0.22 percentage point is explained by computer hardware. 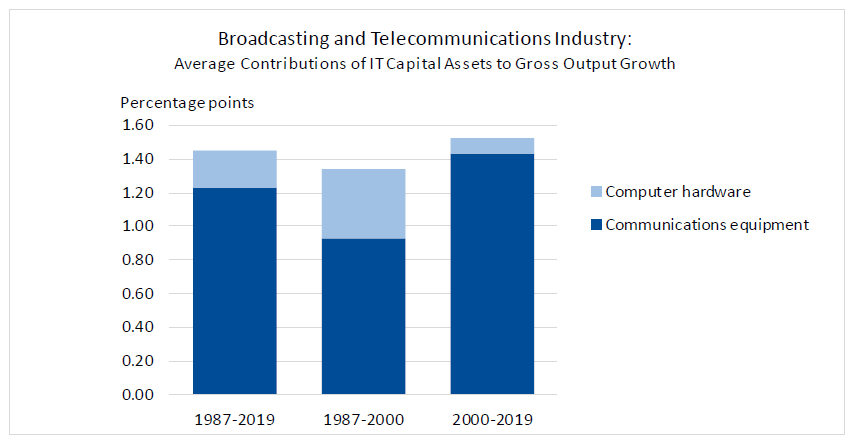 The full data files are available on the integrated industry-level production account page of bea.gov. Highlights and more information about the data will be published in an upcoming issue of the Survey of Current Business.