The estimates of GDP for the U.S. Virgin Islands show that real GDP—GDP adjusted to remove price changes— increased 2.2 percent in 2019 after increasing 1.6 percent in 2018.

The increase in real GDP reflected increases in private fixed investment, exports, and consumer spending. These increases were partly offset by decreases in inventory investment and government spending. Imports, which are a subtraction item in the calculation of GDP, increased. 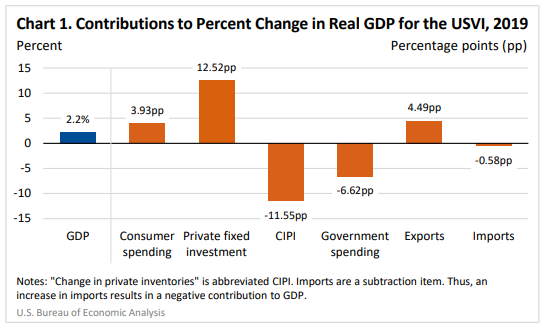 Private fixed investment doubled from the previous year, reflecting growth in business purchases of equipment and in construction, including of homes. A refinery and oil storage facility on St. Croix invested in major capital improvements during 2019 as part of the current owner’s preparations to resume refining operations that were shut down by the former owner of the facility in early 2012. Additionally, disaster-related insurance payouts and federal assistance supported the reconstruction and major repairs of businesses and homes that were destroyed or heavily damaged by two major hurricanes in September 2017.

Within exports, services increased 23.0 percent. For the USVI, exports of services consists primarily of spending by tourists and business travelers. According to USVI government statistics, total visitor arrivals to the USVI increased in 2019; the number of air visitors, who spend substantially more in the islands on average than cruise visitors, increased 30.5 percent. 2018 visitor arrivals by air had been low in the aftermath of the 2017 hurricanes.

Consumer spending increased 5.8 percent, reflecting growth in household purchases of goods, such as motor vehicles and food, and services, including health care.

These increases were partly offset by declines in inventory investment and government spending. The decline in inventory investment reflected a slowdown of petroleum products imported and stored in the islands. Government spending decreased 15.4 percent, reflecting a decline in spending on disaster response and recovery activities by the federal and territorial governments.