Real gross domestic product for American Samoa decreased 1.7 percent in 2021 after increasing 5.0 percent in 2020, according to the U.S. Bureau of Economic Analysis. These statistics were developed under the Statistical Improvement Program, funded by the Office of Insular Affairs of the U.S. Department of the Interior.

The decrease in real GDP in 2021 reflected decreases in exports and private inventory. These decreases were partly offset by increases in personal consumption expenditures, government spending, and private fixed investment. Imports, a subtraction item in the calculation of GDP, declined. 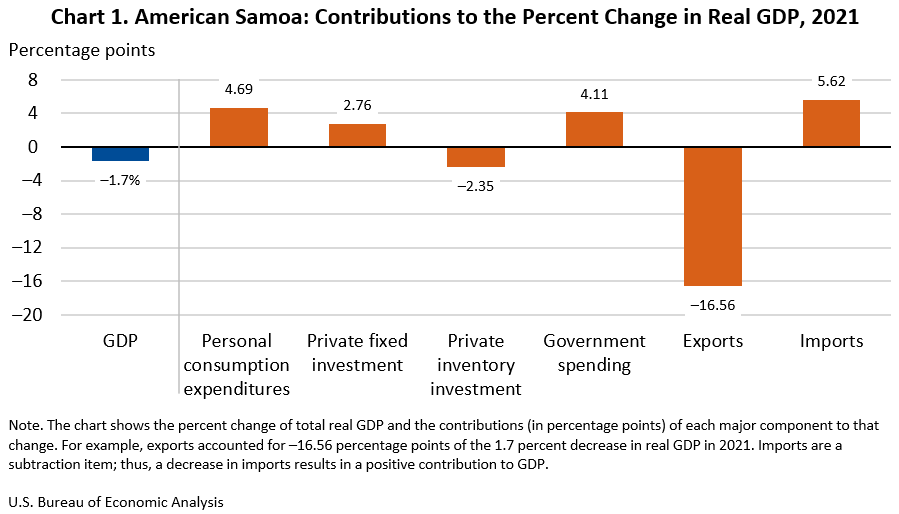 Exports decreased 27.0 percent, primarily reflecting a decline in exports of canned tuna and related products. Data from the U.S. Census Bureau U.S. Trade with Puerto Rico and U.S. Possessions reports show that the quantities of prepared or preserved fish shipped from American Samoa to the 50 states and the District of Columbia were 29 percent lower in 2021 compared with 2020.

Personal consumption expenditures increased 6.2 percent, primarily reflecting growth in spending on goods, such as food and beverages, clothing, and furniture. Consumer spending was supported by government assistance payments distributed to households through the Coronavirus Response and Relief Supplemental Appropriations Act and the American Rescue Plan Act.