These data have been superseded. Please see our latest releases for current estimates and contact information.
Explore Product View
BEA 18-28

The U.S. current-account deficit increased to $124.1 billion (preliminary) in the first quarter of 2018 from $116.1 billion (revised) in the fourth quarter of 2017, according to statistics released by the Bureau of Economic Analysis (BEA). The deficit was 2.5 percent of current-dollar gross domestic product (GDP) in the first quarter, up from 2.4 percent in the fourth quarter. 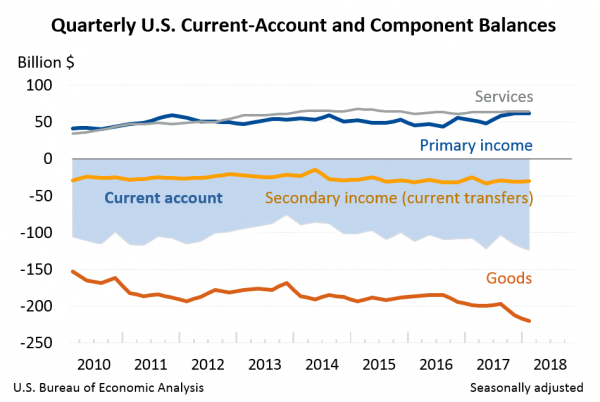 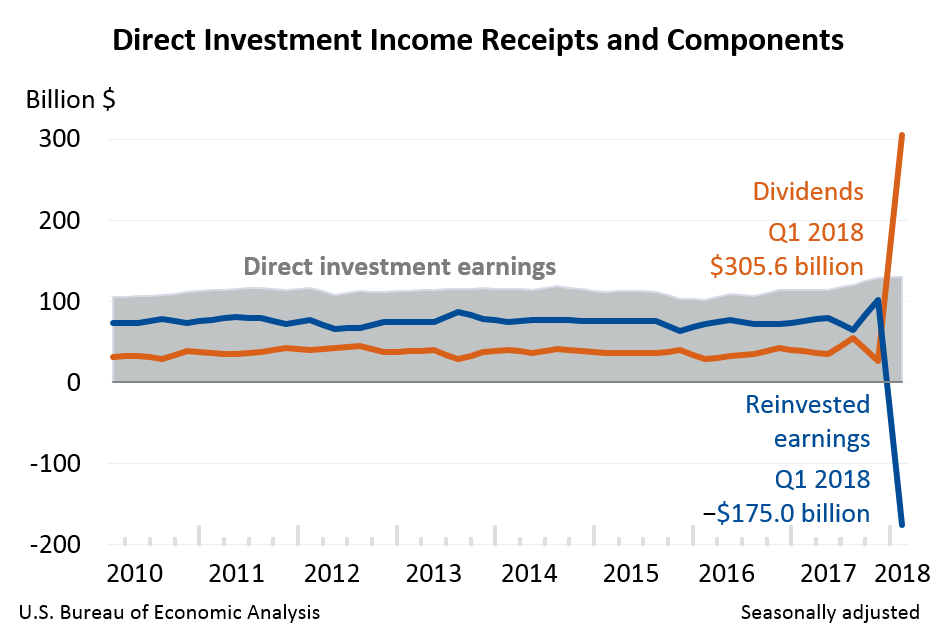 * Stay informed about BEA developments by reading the BEA blog, signing up for BEA’s email subscription service, or following BEA on Twitter @BEA_News.

* Historical time series for these estimates can be accessed in BEA’s interactive data application.

* For more on BEA’s statistics, see our monthly online journal, the Survey of Current Business.

* More information on these international transactions statistics will be provided next
month in the Survey of Current Business.

* More information on the international transactions accounts (ITAs) and a description of
the estimation methods used to compile them is provided in U.S. International Economic Accounts: Concepts and Methods.

The current account consists of transactions between U.S. residents and nonresidents in goods,
services, primary income, and secondary income.

Goods are physical items with ownership rights that can be exchanged among institutional units
through transactions.

Services transactions consist of transactions arising from productive activities that change
the condition of the consumer or that facilitate the exchange of products and financial assets.

Secondary income consists of current transfers between residents and nonresidents. Unlike an
exchange, a transfer is a transaction in which a good, service, or asset is provided without a
corresponding return of economic value. Secondary income receipts and payments include U.S.
government and private transfers, such as U.S. government grants and pensions, fines and
penalties, withholding taxes, personal transfers (remittances), insurance-related transfers,
and other current transfers.

The financial account consists of transactions between U.S. residents and nonresidents for
direct investment, portfolio investment, other investment, reserves, and financial derivative
other than reserves.

Direct investment is a category of cross-border investment associated with a resident in one
economy having control or a significant degree of influence on the management of an enterprise
resident in another economy. Ownership or control of 10 percent or more of the nonresident
entity’s voting securities is the threshold for separating direct investment from other types
of investment. Direct-investment transactions include transactions in equity (including
reinvestment of earnings) and debt instruments.

Other investment is a residual category that includes cross-border financial instruments other
than those included in direct investment, portfolio investment, financial derivatives, and
reserve assets. Other-investment transactions consist of transactions in currency and deposits,
loans, insurance technical reserves, trade credit and advances, and, for liabilities, special
drawing rights allocations.

Reserve assets are those external assets that are readily available to and controlled by
monetary authorities for meeting balance of payments financing needs, for intervention in
exchange markets to affect the currency exchange rate, and for other related purposes such as
maintaining confidence in the currency and the economy and serving as a basis for foreign
borrowing. The major published components are monetary gold, International Monetary Fund (IMF)
special drawing rights (SDRs), reserve position in the IMF, and other reserve assets.

Net lending (borrowing) measures the balance of funds supplied to the rest of the world. Net
lending means that, in net terms, the U.S. economy supplies funds to the rest of the world. Net
borrowing means the opposite. Net lending (borrowing) can be measured by current- and capital-
account transactions or by financial-account transactions. Conceptually, the two measures are
equal. In practice, the two measures differ by the statistical discrepancy.

The international investment position (IIP) accounts are released quarterly. Financial transactions
that are reported in the ITAs are one type of change in position that are recorded in the IIP
accounts.

Statistics on international services, released annually, include detailed annual information on
trade in services and on services supplied through the channel of direct investment by affiliates
of MNEs.