These data have been superseded. Please see our latest releases for current estimates and contact information.
Explore Product View
BEA 19-52

HAGÅTÑA, GUAM (October 9, 2019) -- Today, the Bureau of Economic Analysis (BEA) is releasing estimates of gross domestic product (GDP) for Guam for 2018, in addition to estimates of GDP by industry and compensation by industry for 2017.1 These estimates were developed under the Statistical Improvement Program funded by the Office of Insular Affairs (OIA) of the U.S. Department of the Interior. 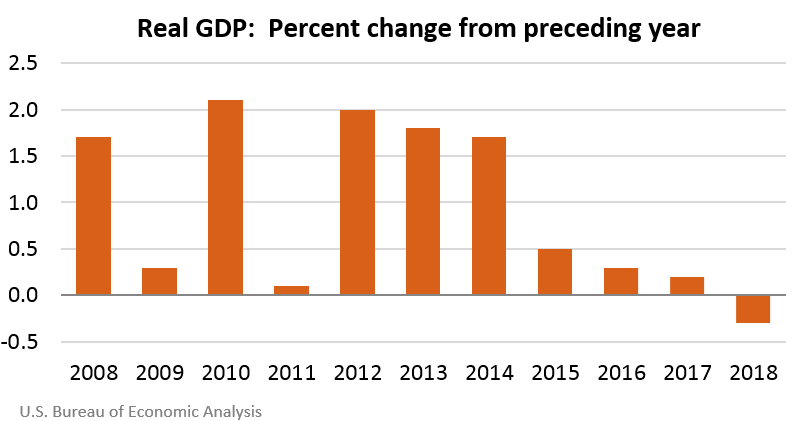 The decline in the Guam economy in 2018 reflected decreases in territorial government spending and private fixed investment that were partly offset by growth in exports of services (see Table 1.4).

Private fixed investment decreased 0.9 percent, reflecting a continued decline in business spending on construction. Although overall construction employment grew in 2018, much of this employment was related to Defense construction; in the private sector, a number of major projects were delayed.

Exports of services, which consists primarily of spending by tourists, grew 2.2 percent. This reflected increases in total visitor arrivals and average spending by Korean and Japanese tourists, who make up much of Guam’s tourist market.

The estimates of GDP by industry for Guam show that the private sector was the source of the growth in real GDP in 2017 (see Table 2.5). The largest contributor to growth was distributive services, reflecting increased activity of the retail sector.

The compensation by industry estimates, which are measured in current dollars, show trends in compensation for major industries (see Table 2.6). Total compensation increased in 2017, primarily reflecting growth in distributive services and in “other” private industries.

Estimates for 2015 to 2017 that were released on November 14, 2018 have been revised in order to incorporate improvements to source data, including newly available data for territorial government spending and revenues from government financial statements and reports. The revised estimates show a similar pattern of inflation-adjusted growth as the previously published estimates (see Table 1.7).

Moving forward, an agreement between OIA and BEA will extend and improve the estimates of GDP for Guam. The information provided by the Guam government will continue to be critical to the successful production of these estimates.

BEA will conduct a comprehensive update of GDP for Guam next year. Estimates of GDP will be revised to reflect methodological improvements and the availability of more complete data over time, in some cases back to 2002. Information from the Census Bureau’s 2017 Economic Census of Island Areas, the most comprehensive industry data available for Guam and the other island areas, will be incorporated at this time. BEA currently plans to release these estimates, in addition to new GDP estimates for 2019, in the fall of 2020. GDP by industry and compensation by industry estimates for 2018 will also be released.

Personal consumption expenditures (PCE), also referred to as “consumer spending,” measures the goods and services purchased by “persons”—that is, by households and by nonprofit institutions serving households (NPISHs)—who are resident in Guam.