Real gross domestic product (GDP) for American Samoa increased 4.0 percent in 2020 after decreasing 0.6 percent in 2019 (table 1.3), according to statistics released today by the U.S. Bureau of Economic Analysis (BEA). These statistics were developed under the Statistical Improvement Program funded by the Office of Insular Affairs (OIA) of the U.S. Department of the Interior.

The increase in real GDP reflected widespread growth among the major components of GDP including exports, private inventory investment, and government spending (table 1.4). These increases were partly offset by an increase in imports, which is a subtraction item in the calculation of GDP. 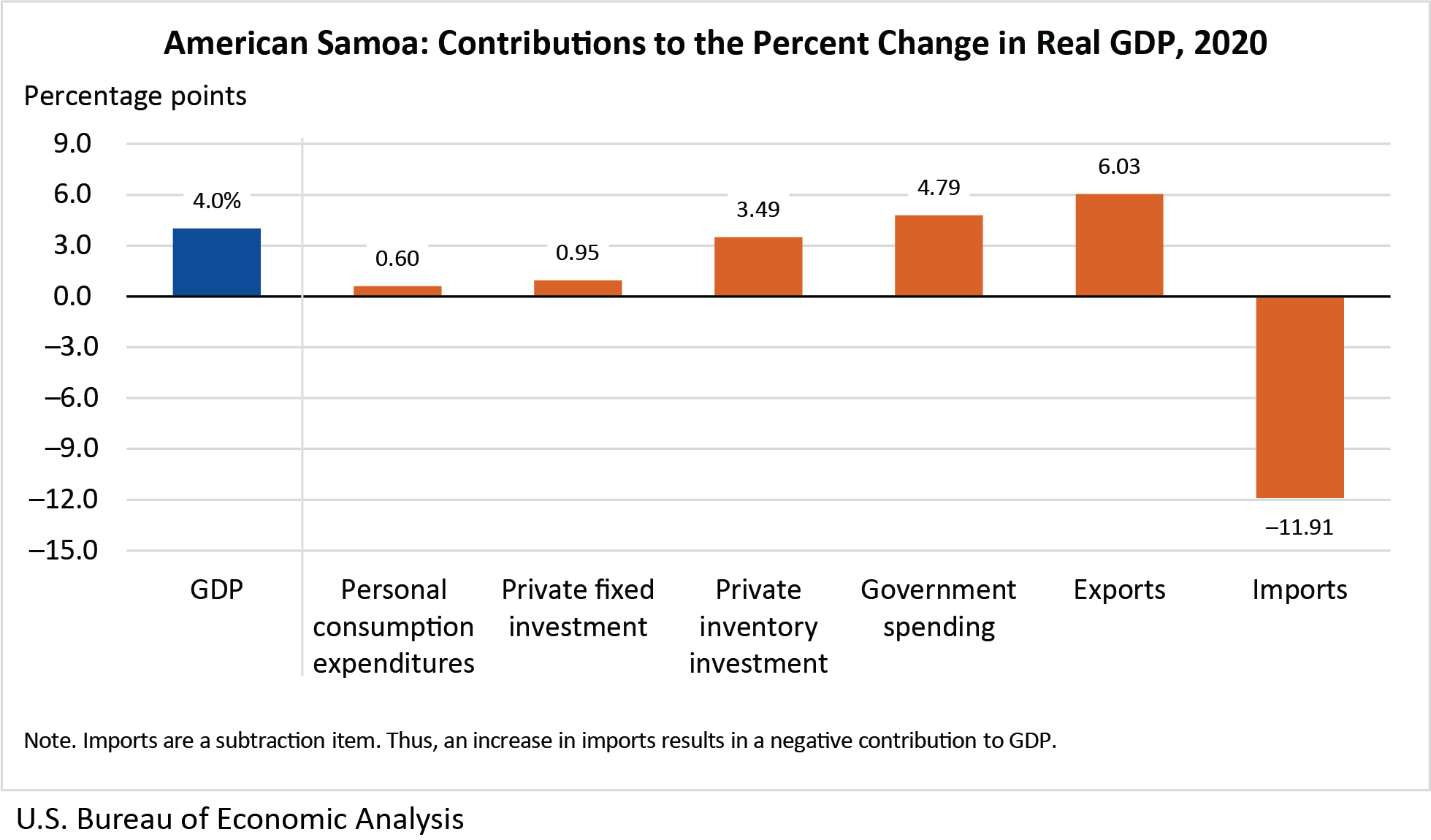 There is often interest in how much a specific GDP component contributes to the change in real GDP. BEA publishes this measure in news release table 1.4. The chart above shows both the percent change of total real GDP and the contributions (in percentage points) of each major component to that change. For example, exports accounted for 6.03 percentage points of the 4.0 percent increase in real GDP in 2020. This means, all else equal, had exports neither increased nor decreased in 2020, real GDP would have decreased 2.0 percent.

Government spending increased 10.1 percent; the increase was accounted for by growth in territorial government spending. Spending by the American Samoa government was supported by federal grant revenues, including Coronavirus Relief Fund payments.

According to the World Health Organization, there were zero confirmed cases of COVID-19 in American Samoa in 2020. The American Samoa economy was affected by the government response to the global COVID-19 pandemic. The territorial government instituted a number of restrictions, such as border closures, and the federal government passed several laws to support and sustain businesses and individuals through the pandemic. However, the full effects of the pandemic cannot be quantified in BEA's statistics for American Samoa because the impacts are generally embedded in the data sources used to estimate the components of GDP.

In 2019, GDP declined by 0.6 percent. The newly available GDP by industry data, which are released on a 1-year lag, reveal that the 2019 GDP decline was the result of a decline in the private sector that was partly offset by an increase in the public sector (table 2.5).

Total compensation increased in 2019, reflecting growth in manufacturing industries and in the territorial government sector (table 2.6).

The accompanying news release tables present estimates for GDP and its major components, GDP by industry, compensation by industry, and estimates of gross domestic income.

Updates to GDP and Related Estimates

Estimates for 2018 and 2019 that were released on December 11, 2020, have been revised to incorporate updates to source data, including the following:

For more information on the data sources underlying these estimates, see the appendix in "Territorial Economic Accounts for American Samoa, the Commonwealth of the Northern Mariana Islands, Guam, and the U.S. Virgin Islands."

Personal consumption expenditures (PCE) measures the goods and services purchased by "persons"—that is, by households and by nonprofit institutions serving households—who are resident in American Samoa.

Private fixed investment measures spending by private businesses, nonprofit institutions, and households on fixed assets in the American Samoa economy. Fixed assets consists of structures, equipment, and software that are used in the production of goods and services.

Quantities ("real" volume measures) and prices are expressed as index numbers with a specified reference year equal to 100 (currently 2012). Quantity and price indexes are calculated using a Fisher chain-weighted formula that incorporates weights from 2 adjacent years. "Real" dollar series are calculated by multiplying the quantity index by the current-dollar value in the reference year and then dividing by 100.

Table 2.2. Value Added by Industry as a Percentage of Gross Domestic Product

Table 2.6. Compensation of Employees by Industry