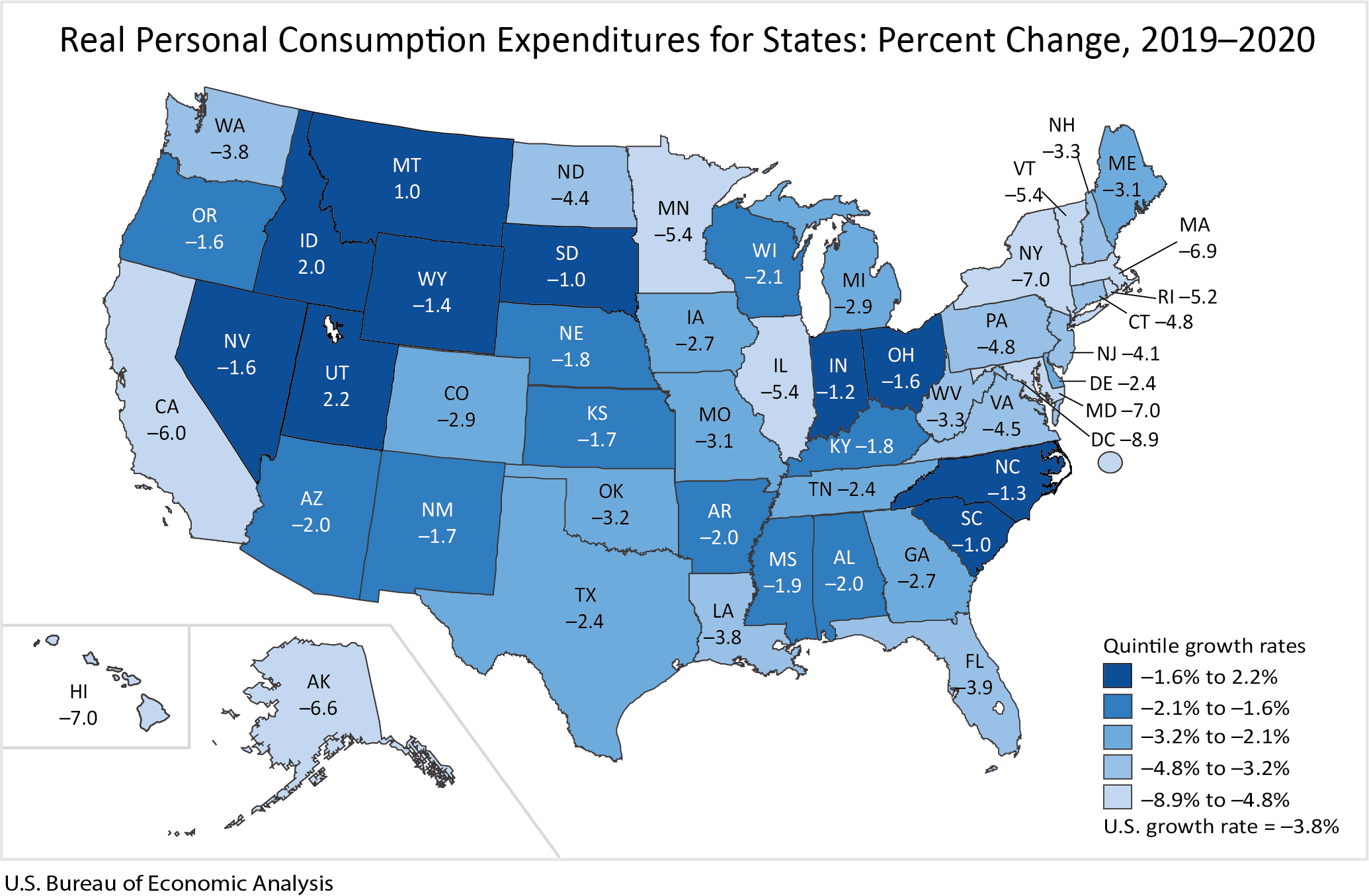 In 2020, real PCE decreased in 47 states and the District of Columbia and increased in only three states: Utah (2.2 percent), Idaho (2.0 percent), and Montana (1.0 percent). Real state PCE is a state's current-dollar PCE adjusted by the state's regional price parity and the national PCE price index.

The 2020 estimates of real PCE and personal income by state were impacted by the response to the spread of COVID-19, as governments issued and lifted "stay-at-home" orders and government pandemic assistance payments were distributed to households and businesses. The full economic effects of the COVID-19 pandemic cannot be quantified in the real PCE and personal income by state estimates because the impacts are generally embedded in source data and cannot be separately identified. For more information, see Federal Recovery Programs and BEA Statistics. 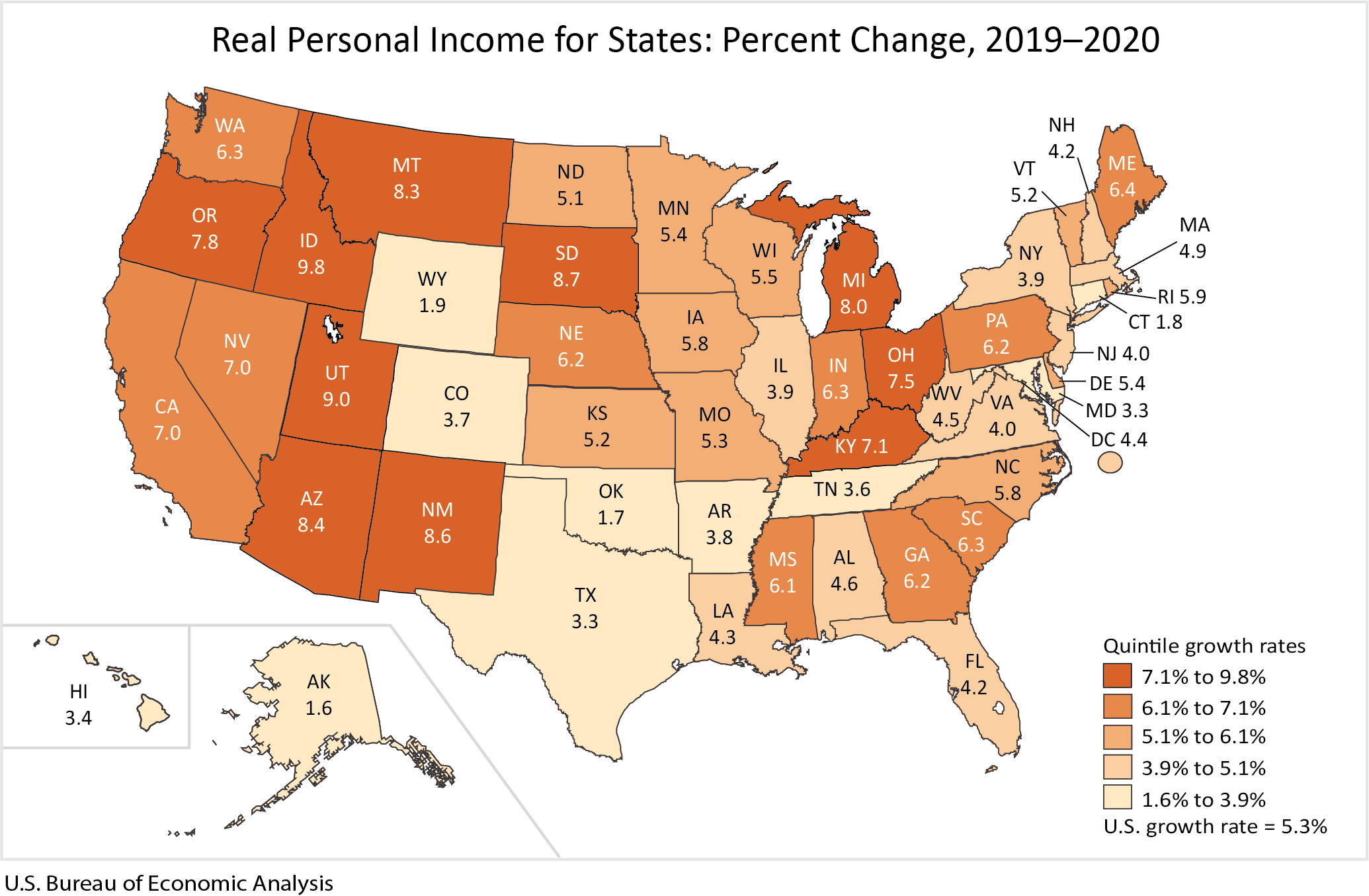 In 2020, real personal income increased in all 50 states and the District of Columbia. 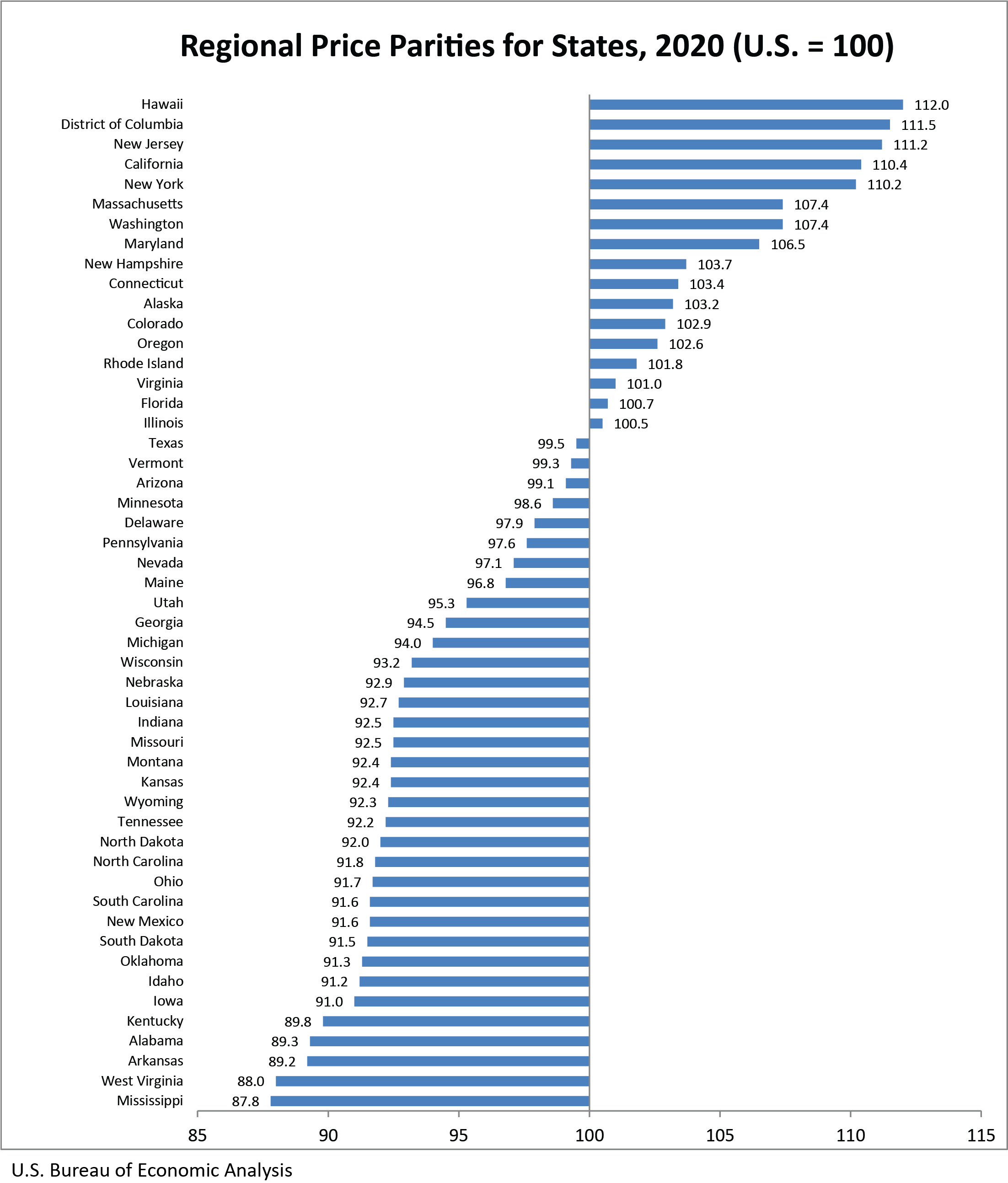 Updates to Real Personal Income by State and Metropolitan Area

BEA state real per capita PCE statistics and real per capita personal income statistics for states and metropolitan areas are calculated using U.S. Census Bureau midyear population estimates. These annual midyear estimates are based on the 2010 census. BEA will incorporate the Census Bureau midyear population estimates based on the 2020 census results when they become available.

Price indexes commonly measure price changes over time. The BEA PCE price index and the Bureau of Labor Statistics Consumer Price Index (CPI) are two examples. Spatial price indexes measure price level differences across regions for one period. An example of these types of indexes are purchasing power parities, which measure differences in price levels across countries for a given period and can be used to convert estimates of per capita gross domestic product into comparable levels in a common currency. The RPP BEA has developed compares regions within the United States, without the need for currency conversion. An implicit regional price deflator (IRPD) can be derived by combining the RPPs and the U.S. PCE price index.

The CPI price levels and the ACS housing rents are combined with the expenditure weights using a multilateral aggregation method that expresses a region's price level relative to that of the United States.3

The IRPD will equal current-dollar PCE divided by real PCE in constant dollars. The growth rate or year-to-year change in the IRPDs is a measure of regional inflation.4

1 The BEA RPP statistics are based in part on restricted access CPI data from the Bureau of Labor Statistics (BLS). The BEA statistics presented herein are products of BEA and not BLS.

2 To estimate RPPs, annual average CPI price quotes and ACS housing rents are quality adjusted. The rents data are from the ACS Public Use Microdata Sample, and results incorporate BEA's new method for estimating housing services across the regional and national accounts (for more information, see the May 2021 issue of the Survey of Current Business).

4 The growth rate of the IRPDs will not necessarily equal the region or metropolitan area price deflators published by BLS. This is because the CPI deflators are calculated directly, while the IRPDs are indirect estimates based on CPI and ACS price levels and PCE expenditure weights.

Detailed Consumer Price Index (CPI) price data are adjusted to obtain average price levels for the Bureau of Labor Statistics areas1. These are allocated to counties in combination with direct price and expenditure data on housing rents from the American Community Survey.

Personal consumption expenditures (PCE) at RPPs is current-dollar PCE divided by the price parity2 for a given year and region.

Real PCE is PCE at RPPs divided by the national PCE price index. The result is real PCE in constant dollars (using 2012 as the reference year). Using Alabama in 2020 as an example:

Total real PCE in the United States is derived as the sum of the regional estimates and net expenditures abroad by U.S. residents divided by the U.S. PCE price index.

Implicit regional price deflator is the product of the RPP times the national PCE price index. It is equal to current-dollar PCE divided by real PCE.

1 The CPI represents about 93 percent of the total U.S. population including almost all residents of urban or metropolitan areas.