Real gross domestic product (GDP) increased in 47 states and the District of Columbia in the third quarter of 2022, with the percent change in real GDP ranging from 8.7 percent in Alaska to –0.7 percent in Mississippi (table 1), according to statistics released today by the U.S. Bureau of Economic Analysis (BEA).

Current-dollar GDP increased in all 50 states and the District of Columbia in the third quarter, with the percent change ranging from 10.4 percent in Oregon to 2.3 percent in North Dakota.

Personal income increased in all 50 states and the District of Columbia in the third quarter, with the percent change ranging from 14.2 percent in Colorado to 1.4 percent in Kentucky (table 4). 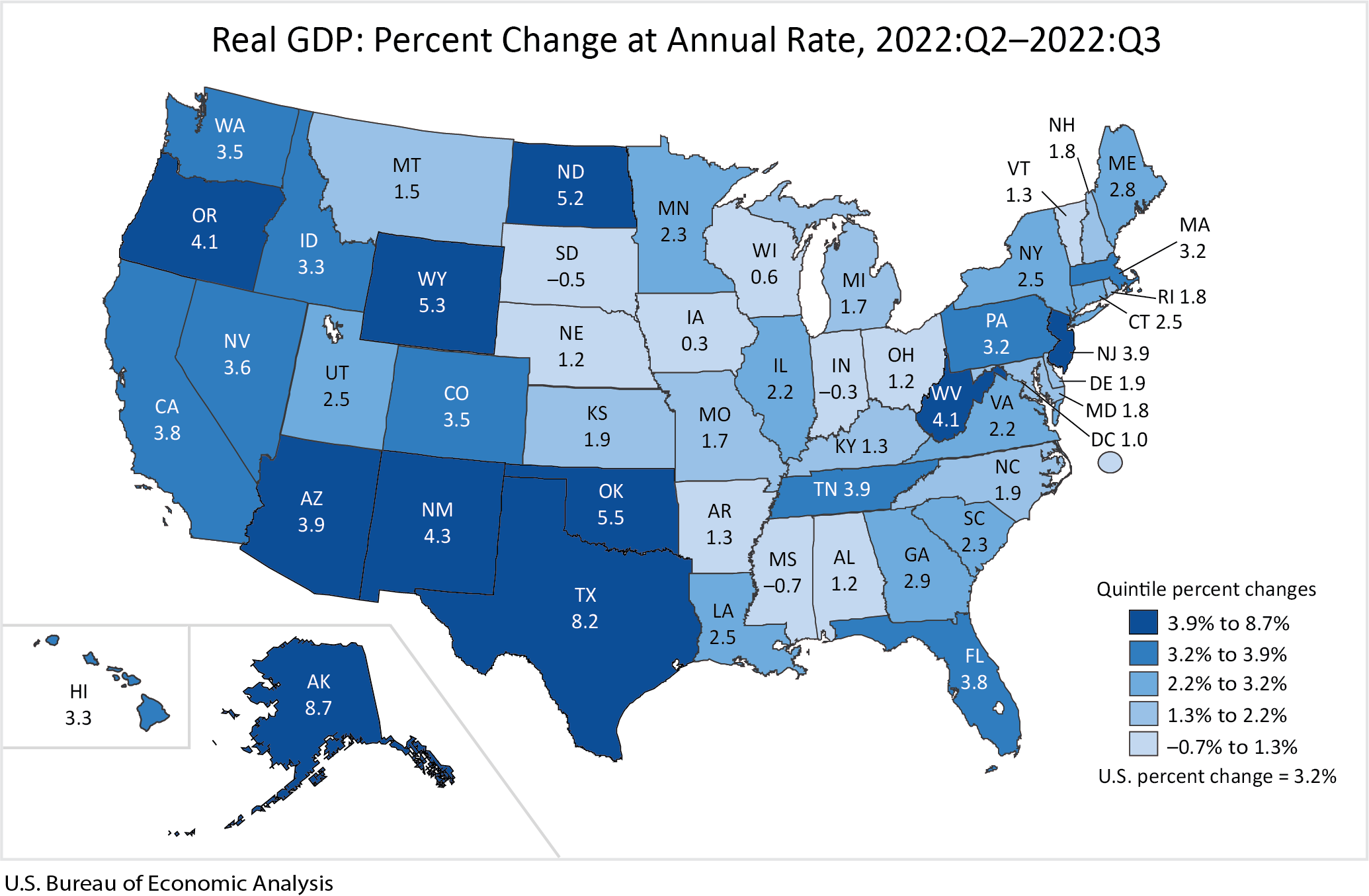 In the third quarter of 2022, as real GDP for the nation increased at an annual rate of 3.2 percent, real GDP increased in 16 of the 23 industry groups for which BEA prepares quarterly state estimates (table 2). Information services; professional, scientific, and technical services; and mining were the leading contributors to the increase in real GDP nationally.

In the third quarter of 2022, state personal income increased at an annual rate of 5.3 percent across all 50 states and the District of Columbia. 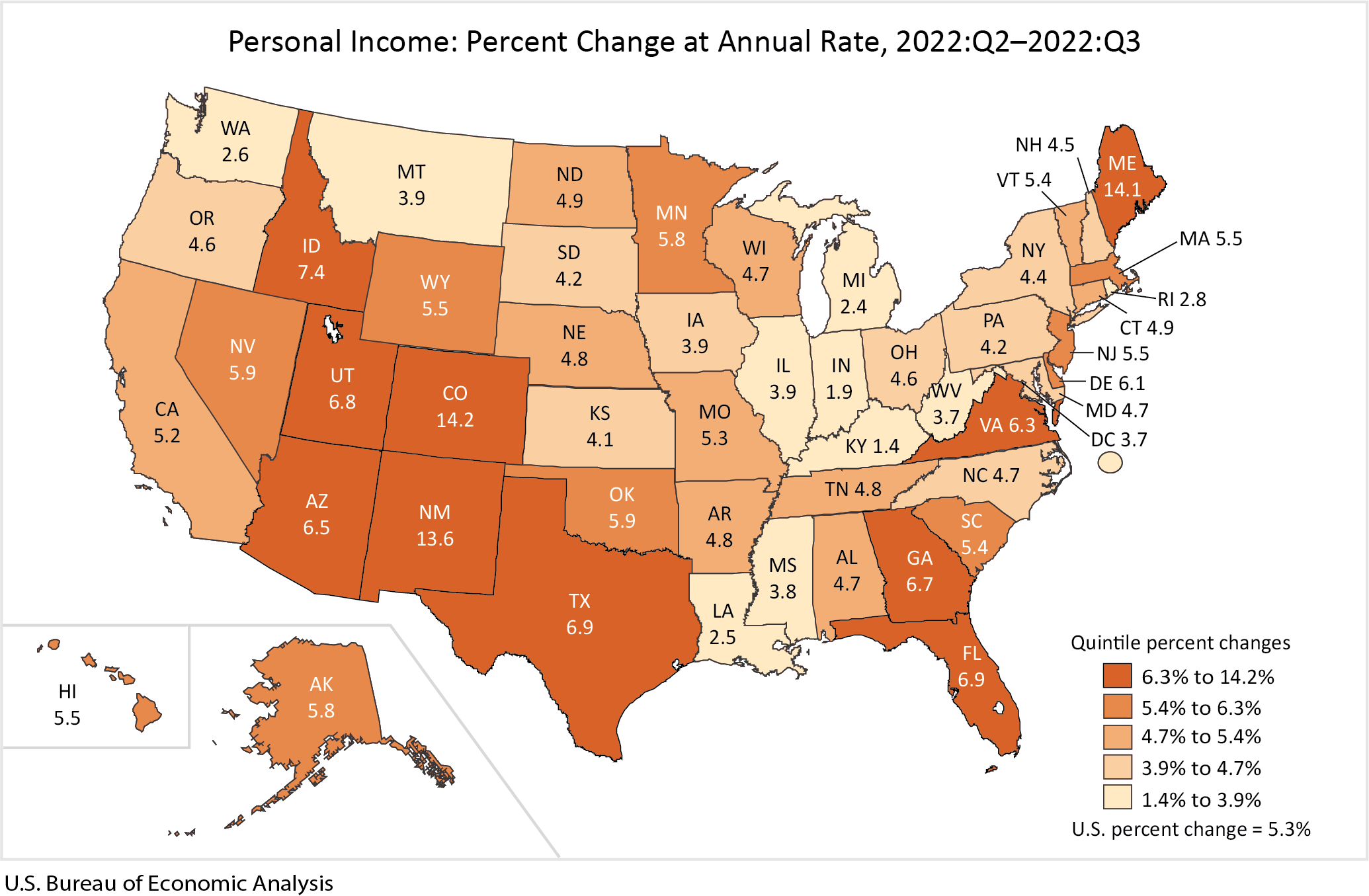 Nationally, increases in earnings, property income (dividends, interest, and rent), and transfer receipts all contributed to the increase in personal income (chart 1). 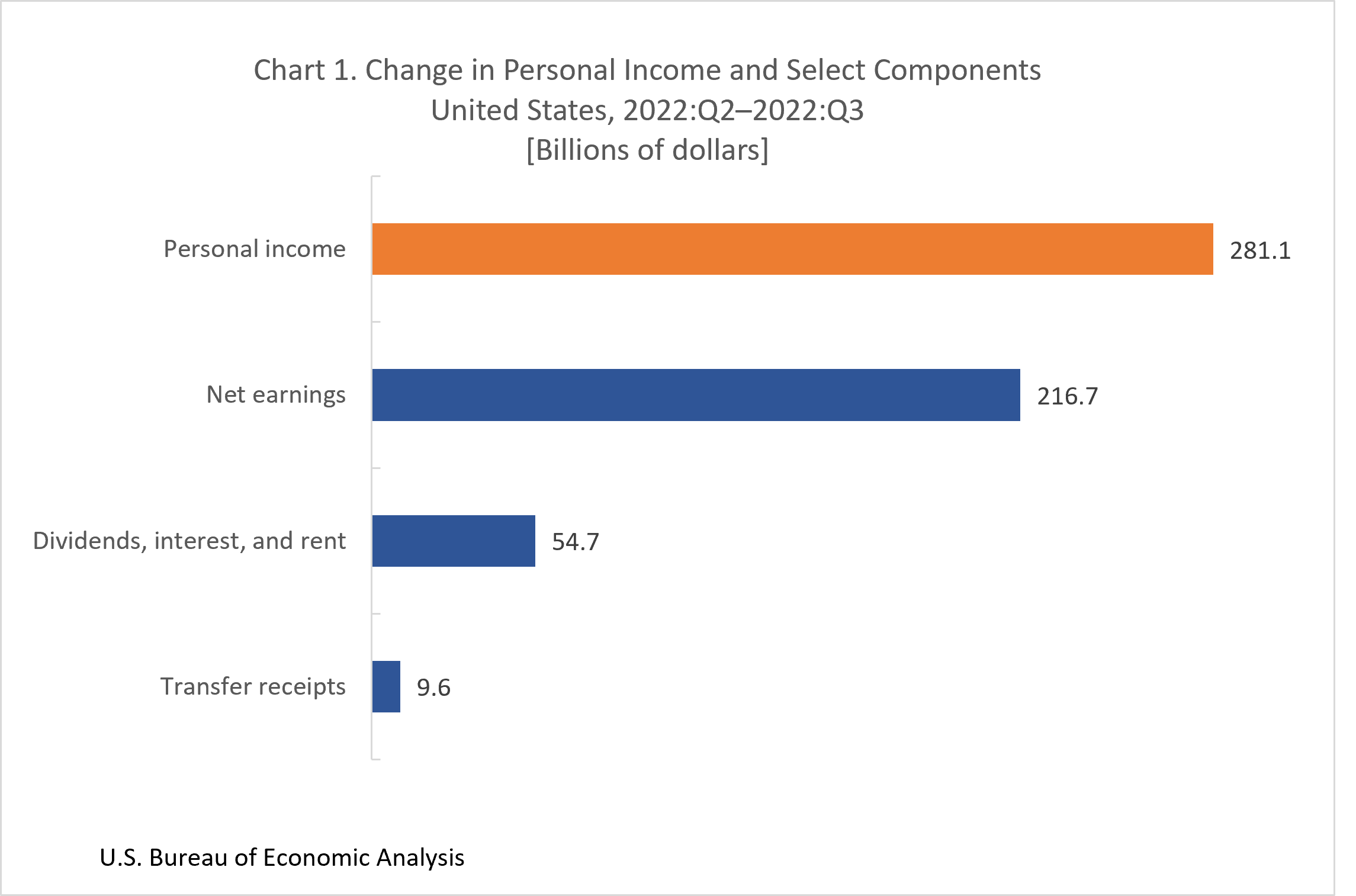 Earnings increased in all 50 states and the District of Columbia, increasing 6.5 percent nationally. The percent change in earnings ranged from 8.5 percent in Texas to 3.2 percent in Indiana.

Earnings increased in 22 of the 24 industries for which BEA prepares quarterly estimates (table 6). Health care and social assistance; professional, scientific, and technical services; and state and local government were the leading contributors to the overall growth in earnings.

Property income increased in all 50 states and the District of Columbia, increasing 5.5 percent nationally. The percent change ranged from 8.1 percent in Idaho to 3.0 percent in Kansas (table 4).

Today, BEA also released revised quarterly estimates of personal income by state for the first quarter of 2022 through the second quarter of 2022. The updates incorporate new and revised source data that are more complete and more detailed than previously available and to align the states with revised national estimates from the National Income and Product Accounts released on December 22, 2022.

1. See “How are state refundable tax credits recorded in the National Income and Product Accounts (NIPAs)?” on the BEA website.

Gross domestic product (GDP) by state is the market value of goods and services produced by the labor and property located in a state. GDP by state is the state counterpart of the nation's GDP, the Bureau's featured and most comprehensive measure of U.S. economic activity.

Current-dollar statistics are valued in the prices of the period when the transactions occurred–that is, at "market value." They are also referred to as "nominal GDP" or "current-price GDP."

Quarter-to-quarter percent changes are calculated from unrounded data and are annualized. Annualized growth rates show the rate of change that would have occurred had the pattern been repeated over four quarters (1 year). Annualized rates of change can be calculated as follows: (((level of later quarter / level of earlier quarter)^4)-1)*100. Quarterly estimates are expressed at seasonally adjusted annual rates unless otherwise specified. Quarter-to-quarter dollar changes are differences between published estimates.

Seasonal adjustment and annual rates. Quarterly values are expressed at seasonally adjusted annual rates. For details, see the FAQ "Why does BEA publish estimates at annual rates?" on the BEA website.

Quantities and prices. Quantities, or “real” measures, are expressed as index numbers with a specified reference year equal to 100 (currently 2012). Quantity indexes are calculated using a Fisher chain-weighted formula that incorporates weights from two adjacent periods (quarters for quarterly data and annuals for annual data). “Real” dollar series are calculated by multiplying the quantity index by the current dollar value in the reference year and then dividing by 100. Percent changes calculated from chained-dollar levels and quantity indexes are conceptually the same; any differences are due to rounding.

Uses of GDP and personal income by state statistics

GDP and personal income by state statistics provide a framework for analyzing current economic conditions in each state and can serve as a basis for decisionmaking. For example: