These data have been superseded. Please see our latest releases for current estimates and contact information.
Explore Product View
BEA 21-67

Real gross domestic product (GDP) increased at an annual rate of 2.3 percent in the third quarter of 2021 (table 1), according to the "third" estimate released by the Bureau of Economic Analysis. In the second quarter, real GDP increased 6.7 percent.

The “third” estimate of GDP released today is based on more complete source data than were available for the "second" estimate issued last month. In the second estimate, the increase in real GDP was 2.1 percent. The update primarily reflects upward revisions to personal consumption expenditures (PCE) and private inventory investment that were partly offset by a downward revision to exports. Imports, which are a subtraction in the calculation of GDP, were revised down (refer to "Updates to GDP").

COVID-19 Impact on the Third-Quarter 2021 GDP Estimate
The increase in third quarter GDP reflected the continued economic impact of the COVID-19 pandemic. A resurgence of COVID-19 cases resulted in new restrictions and delays in the reopening of establishments in some parts of the country. Government assistance payments in the form of forgivable loans to businesses, grants to state and local governments, and social benefits to households all decreased. The full economic effects of the COVID-19 pandemic cannot be quantified in the GDP estimate for the third quarter because the impacts are generally embedded in source data and cannot be separately identified. For more information, refer to the Technical Note and Federal Recovery Programs and BEA Statistics.

The deceleration in real GDP in the third quarter was more than accounted for by a slowdown in PCE. From the second quarter to the third quarter, spending for goods turned down (led by motor vehicles and parts) and services decelerated (led by food services and accommodations).

Current dollar GDP increased 8.4 percent at an annual rate, or $461.3 billion, in the third quarter to a level of $23.20 trillion. In the second quarter, GDP increased 13.4 percent, or $702.8 billion (table 1 and table 3). More information on the source data that underlie the estimates is available in the "Key Source Data and Assumptions" file on BEA’s website.

Profits from current production (corporate profits with inventory valuation and capital consumption adjustments) increased $96.9 billion in the third quarter, compared with an increase of $267.8 billion in the second quarter (table 10).

In the third estimate of the third quarter, real GDP increased 2.3 percent, 0.2 percentage point higher than in the second estimate. Upward revisions to PCE (specifically, an upward revision to services), private inventory investment (both farm and nonfarm), residential fixed investment, state and local government spending, and nonresidential fixed investment were partly offset by downward revisions to exports and federal government spending. Imports were revised down. For more information, refer to the Technical Note and the "Additional Information" section that follows.

The increase in private services-producing industries primarily reflected increases in professional, scientific, and technical services; finance and insurance (led by securities, commodity contracts, and investments); accommodation and food services; administrative and waste management services (led by administrative and support services); and information (led by motion picture and sound recording industries). These increases were partly offset by decreases in retail trade (led by motor vehicle and parts dealers) and wholesale trade.

The decrease in private goods-producing industries was widespread, led by construction. 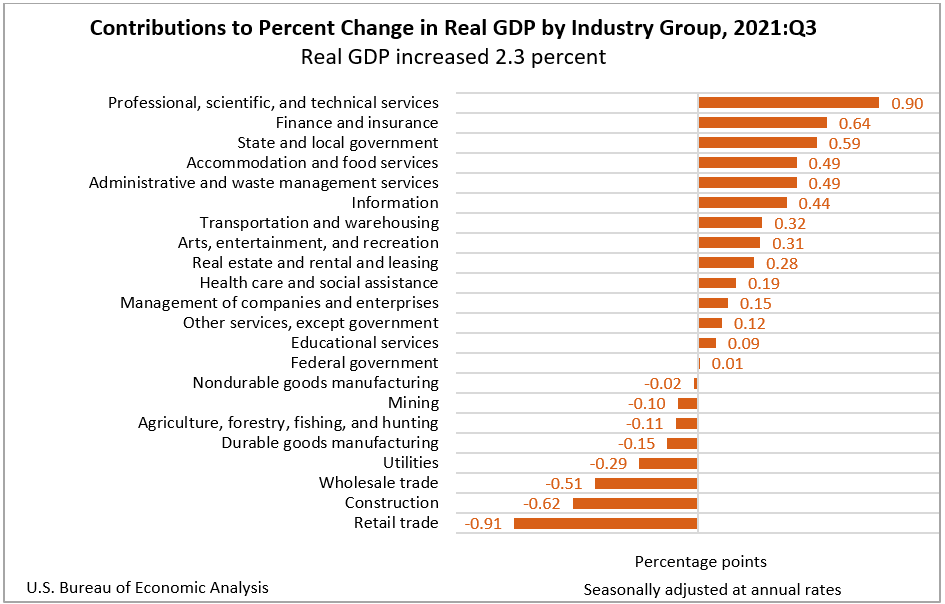 For more definitions, refer to the Glossary: National Income and Product Accounts.

Quantities and prices. Quantities, or "real" volume measures, and prices are expressed as index numbers with a specified reference year equal to 100 (currently 2012). Quantity and price indexes are calculated using a Fisher-chained weighted formula that incorporates weights from two adjacent periods (quarters for quarterly data and annuals for annual data). For details on the calculation of quantity and price indexes, refer to Chapter 4: Estimating Methods in the NIPA Handbook.