These data have been superseded. Please see our latest releases for current estimates and contact information.
Explore Product View
BEA 22—64

Real gross domestic product (GDP) increased at an annual rate of 3.2 percent in the third quarter of 2022 (table 1), according to the "third" estimate released by the Bureau of Economic Analysis. In the second quarter, real GDP decreased 0.6 percent.

The "third" estimate of GDP released today is based on more complete source data than were available for the "second" estimate issued last month.  In the second estimate, the increase in real GDP was 2.9 percent. The updated estimates primarily reflected upward revisions to consumer spending and nonresidential fixed investment that were partly offset by a downward revision to private inventory investment. For more information, refer to "Updates to GDP."

Within consumer spending, an increase in services (led by health care and "other" services) was partly offset by a decrease in goods (led by motor vehicles and parts as well as food and beverages). Within nonresidential fixed investment, increases in equipment and intellectual property products were partly offset by a decrease in structures. The increase in state and local government spending was led by increases in investment in structures and in compensation of state and local government employees. The increase in federal government spending was led by defense spending.

Real GDP turned up in the third quarter, increasing 3.2 percent after decreasing 0.6 percent in the second quarter. The upturn primarily reflected accelerations in nonresidential fixed investment and consumer spending, a smaller decrease in private inventory investment, and upturns in state and local as well as federal government spending that were partly offset by a larger decrease in residential fixed investment. Imports turned down.

Current‑dollar GDP increased 7.7 percent at an annual rate, or $475.5 billion, in the third quarter to a level of $25.72 trillion (table 1 and table 3), an upward revision of $25.0 billion from the previous estimate. More information on the source data that underlie the estimates is available in the "Key Source Data and Assumptions" file on BEA's website.

The 3.2 percent increase in third-quarter real GDP was 0.3 percentage point higher than previously estimated in the "second" estimate. Upward revisions to consumer spending, nonresidential fixed investment, and state and local government spending were partly offset by downward revisions to private inventory investment and exports. For more information, refer to the Technical Note. For information on updates to GDP, refer to the "Additional Information" section that follows. 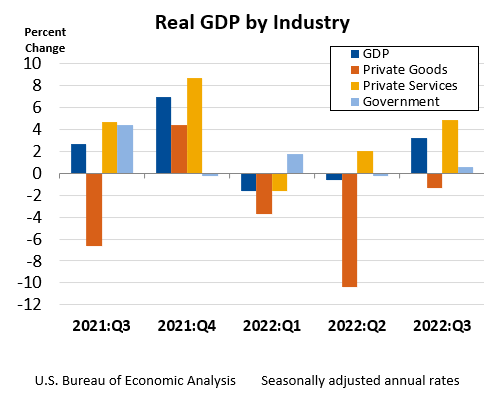 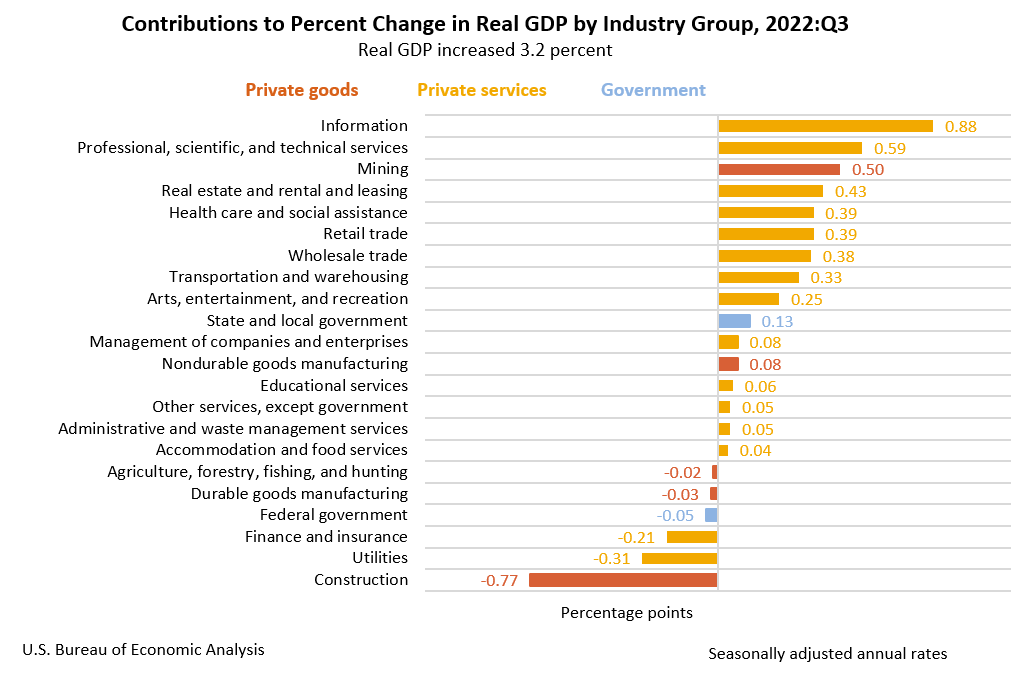 Real gross output—principally a measure of an industry's sales or receipts, which includes sales to final users in the economy (GDP) and sales to other industries (intermediate inputs)—increased 2.5 percent in the third quarter. This reflected increases of 3.0 percent for private services-producing industries, 1.2 percent for private goods-producing industries, and 2.3 percent for government (table 16). Overall, 18 of 22 industry groups contributed to the increase in real gross output.

How does the 2022 national opioid settlement impact the NIPAs?