These data have been superseded. Please see our latest releases for current estimates and contact information.
Explore Product View
BEA 21-29

Real gross domestic product (GDP) increased at an annual rate of 6.4 percent in the first quarter of 2021 (table 1), according to the "third" estimate released by the Bureau of Economic Analysis. In the fourth quarter, real GDP increased 4.3 percent.

The “third” estimate of GDP released today is based on more complete source data than were available for the "second" estimate issued last month. In the second estimate, the increase in real GDP was also 6.4 percent. Upward revisions to nonresidential fixed investment, private inventory investment, and exports were offset by an upward revision to imports, which are a subtraction in the calculation of GDP (see "Updates to GDP").

COVID-19 Impact on the First-Quarter 2021 GDP Estimate
The increase in first quarter GDP reflected the continued economic recovery, reopening of establishments, and continued government response related to the COVID-19 pandemic. In the first quarter, government assistance payments, such as direct economic impact payments, expanded unemployment benefits, and Paycheck Protection Program loans, were distributed to households and businesses through the Coronavirus Response and Relief Supplemental Appropriations Act and the American Rescue Plan Act. The full economic effects of the COVID-19 pandemic cannot be quantified in the GDP estimate for the first quarter of 2021 because the impacts are generally embedded in source data and cannot be separately identified. For more information, see the Technical Note and Federal Recovery Program and BEA Statistics.

The increase in PCE reflected increases in durable goods (led by motor vehicles and parts), nondurable goods (led by food and beverages), and services (led by food services and accommodations). The increase in nonresidential fixed investment reflected increases in equipment (led by information processing equipment) and intellectual property products (led by software). The increase in federal government spending primarily reflected an increase in payments made to banks for processing and administering the Paycheck Protection Program loan applications as well as purchases of COVID-19 vaccines for distribution to the public. The decrease in private inventory investment primarily reflected a decrease in retail trade inventories (mainly by motor vehicles and parts dealers).

Current dollar GDP increased 11.0 percent at an annual rate, or $566.8 billion, in the first quarter to a level of $22.06 trillion. In the fourth quarter, GDP increased 6.3 percent, or $324.4 billion (table 1 and table 3). More information on the source data that underlie the estimates is available in the Key Source Data and Assumptions file on BEA’s website.

Profits from current production (corporate profits with inventory valuation and capital consumption adjustments) increased $55.2 billion in the first quarter, in contrast to a decrease of $31.4 billion in the fourth quarter (table 10).

In the third estimate, the change in first-quarter real GDP was the same as in the second estimate. Upward revisions to nonresidential fixed investment, private inventory investment, exports, and PCE were offset by an upward revision to imports. For more information, see the Technical Note. For information on updates to GDP, see the "Additional Information" section that follows.

The increase in private services-producing industries primarily reflected increases in professional, scientific, and technical services; information (led by data processing, internet publishing, and other information services); administrative and waste management services (led by administrative and support services); real estate and rental and leasing; and retail trade. These increases were partly offset by decreases in other services (which includes activities of political organizations); healthcare and social assistance (led by ambulatory health care services); and utilities.

The increase in government reflected increases in federal as well as state and local. 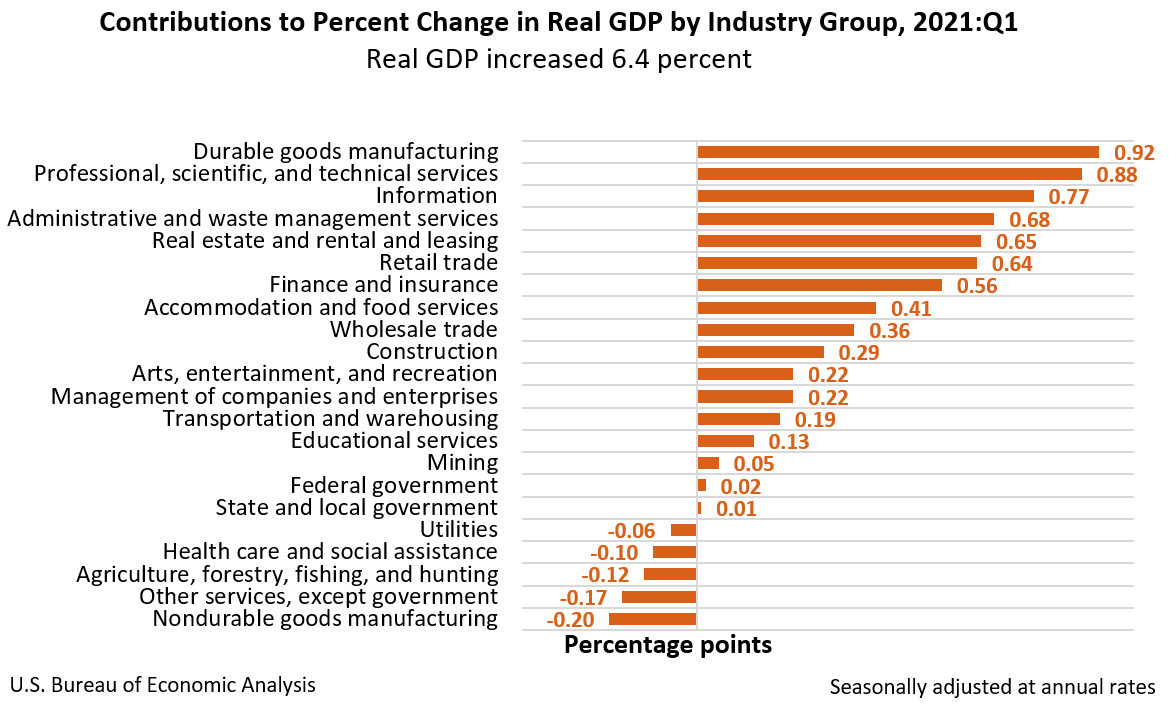 Real gross output—principally a measure of an industry’s sales or receipts, which includes sales to final users in the economy (GDP) and sales to other industries (intermediate inputs)—increased 8.9 percent in the first quarter (table 16). Private goods-producing industries decreased 1.7 percent, private services-producing industries increased 13.4 percent, and government increased 6.0 percent. Overall, 17 of 22 industry groups contributed to the increase in real gross output, led by retail trade, finance and insurance, and information. A decrease in nondurable goods manufacturing was the most notable offset to these increases.