These data have been superseded. Please see our latest releases for current estimates and contact information.
Explore Product View
BEA 19-44

The U.S. current account deficit, which reflects the combined balances on trade in goods and services and income flows between U.S. residents and residents of other countries, narrowed by $8.0 billion, or 5.9 percent, to $128.2 billion in the second quarter of 2019, according to statistics from the U.S. Bureau of Economic Analysis (BEA). The revised first quarter deficit was $136.2 billion.

The second quarter deficit was 2.4 percent of current dollar gross domestic product, down from 2.6 percent in the first quarter.

The $8.0 billion narrowing of the current account deficit in the second quarter mainly reflected an expanded surplus on primary income. 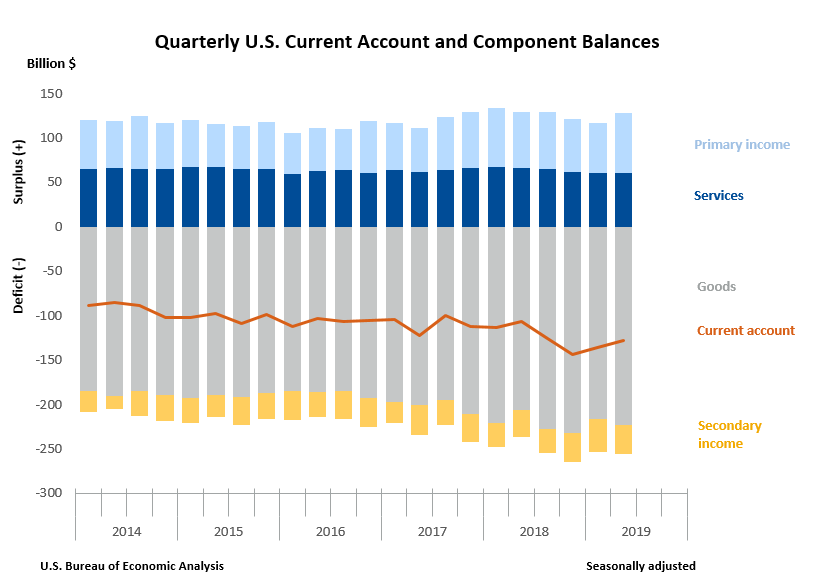 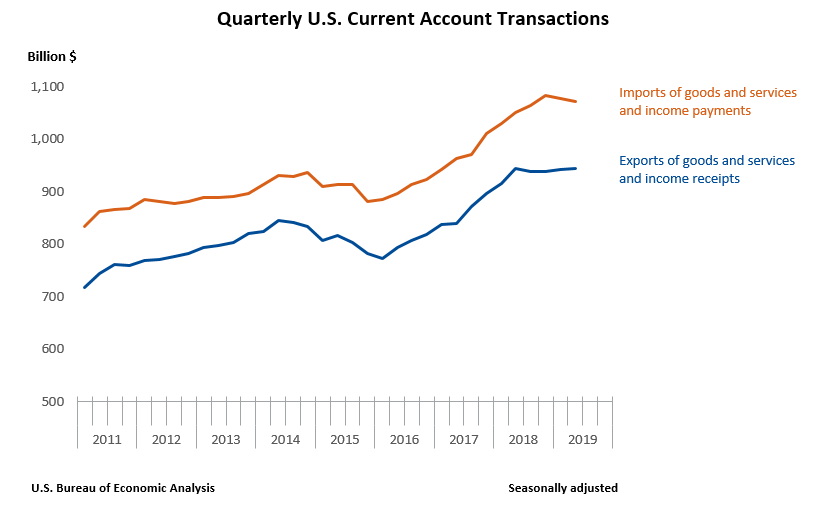 Exports of goods decreased $4.5 billion, to $414.6 billion, mainly reflecting a decrease in capital goods, mostly civilian aircraft. Imports of goods increased $2.0 billion, to $637.9 billion, led by an increase in industrial supplies and materials. Changes in the other major categories were nearly offsetting.

With this release of the international transactions accounts (ITAs), BEA has introduced two new tables that present: (1) geographic detail by type of transaction (ITA table 1.4) and (2) annual trade in goods and services with expanded country and geographic area detail (ITA table 1.5). These tables are released as prototypes, along with prototypes for the other standard ITA tables that reflect changes that will be introduced with the annual update in June 2020. These prototype tables are provided alongside the current standard presentation to prepare data users for the upcoming changes. The two sets of tables will be published concurrently until June 2020, when the prototype tables will replace the existing tables as the standard presentation. The prototype tables, published as addenda to the current tables, are available in BEA’s interactive data application. Additional information is available in "Prototype Tables for the International Transactions Accounts."