These data have been superseded. Please see our latest releases for current estimates and contact information.
Explore Product View
BEA 20-40

Worldwide employment by U.S. multinational enterprises (MNEs) increased 1.4 percent to 43.0 million workers in 2018 from 42.4 million in 2017, according to statistics released by the Bureau of Economic Analysis on the operations and finances of U.S. parent companies and their foreign affiliates.

Employment in the United States by U.S. parents increased 2.1 percent to 28.6 million workers in 2018. U.S. parents accounted for 66.5 percent of worldwide employment by U.S. MNEs, up from 66.1 percent in 2017. Employment abroad by majority-owned foreign affiliates (MOFAs) of U.S. MNEs was nearly unchanged at 14.4 million workers and accounted for 33.5 percent of employment by U.S. MNEs worldwide.

Worldwide research and development expenditures of U.S. MNEs increased 6.9 percent to $381.4 billion. U.S. parents accounted for expenditures of $323.1 billion and MOFAs for $58.2 billion. 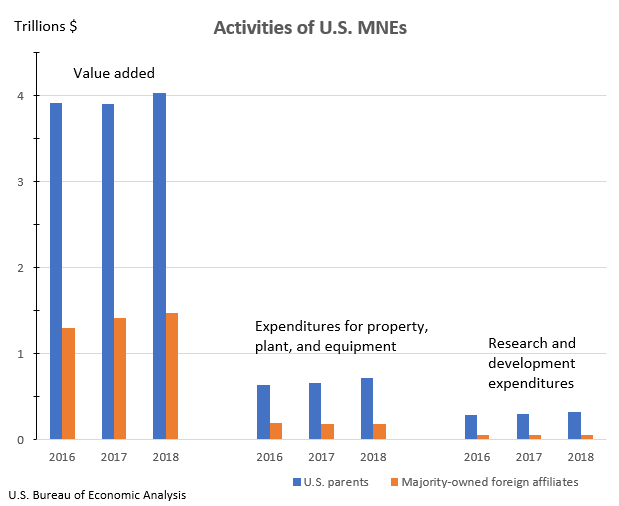 Additional statistics on the activities of U.S. parent companies and their foreign affiliates including sales, balance sheet and income statement items, compensation of employees, trade in goods, and more are available on BEA’s website. More industry detail for U.S. parents and more industry and country detail for foreign affiliates are also available on the website.

U.S. MNE Activities in the First Year After the Tax Cuts and Jobs Act (TCJA)

The TCJA generally eliminated taxes on dividends, or repatriated earnings, to U.S. multinationals from their foreign affiliates and changed the nominal U.S. domestic corporate tax rate from 35 percent to 21 percent beginning on January 1, 2018. BEA’s statistics cannot separate the effects of the TCJA from other prevalent economic conditions and company-specific factors in 2018, however, the statistics on the Activities of U.S. MNEs for 2018 in this release provide a first look at U.S. MNE activities in the year after the TCJA took effect.

U.S. parents grew faster than MOFAs in 2018 for several measures of their activities, including employment, value added, expenditures for property, plant, and equipment (PP&E), and research and development expenditures (R&D). This contrasts with the long-term trend of MOFA activities growth outpacing that of U.S. parents. In 2018, U.S. parents experienced above-average growth rates for these measures, while MOFAs grew at below-average rates.

Statistics for 2017 are revised to incorporate newly available and revised source data. Preliminary statistics for 2017 were released in August 2019 and highlighted in “Activities of U.S. Multinational Enterprises in 2017” in the September 2019 issue of the Survey of Current Business.