These data have been superseded. Please see our latest releases for current estimates and contact information.
Explore Product View
BEA 21—33

Expenditures by foreign direct investors to acquire, establish, or expand U.S. businesses totaled $120.7 billion (preliminary) in 2020. Expenditures were down 45.4 percent from $221.2 billion (revised) in 2019 and below the annual average of $314.4 billion for 2014-2019. As in previous years, acquisitions of existing businesses accounted for a large majority of total expenditures. 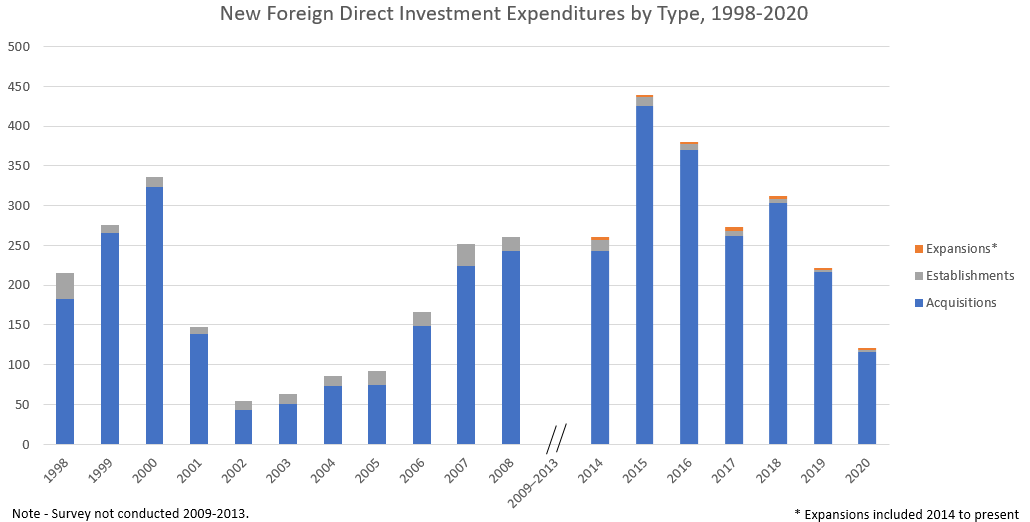 Expenditures by industry, country, and state in 2020

By country of ultimate beneficial owner (UBO), the largest investing country was Germany, with expenditures of $20.5 billion. Canada ($15.2 billion) was the second largest country, followed by Switzerland ($13.8 billion). By region, Europe contributed two-thirds of new investment in 2020.

By U.S. state, Texas received the largest investment, with expenditures of $18.6 billion, followed by California ($17.8 billion) and New Jersey ($14.1 billion).

By U.S. industry, greenfield expenditures in 2020 were largest in manufacturing ($1.3 billion) and utilities ($1.1 billion). By region of UBO, Europe ($2.2 billion) and Asia and Pacific ($1.7 billion) had the largest expenditures. By U.S. state, Texas received the highest level of greenfield investment ($1.0 billion).

By U.S. state, Texas had the largest employment (between 50,000 and 100,000), followed by California (21,000) and Arizona (9,300). Employment for an acquired entity that operated in multiple states is attributed to the state in which it had the greatest number of employees.