These data have been superseded. Please see our latest releases for current estimates and contact information.
Explore Product View
BEA 21-28

The U.S. current account deficit, which reflects the combined balances on trade in goods and services and income flows between U.S. residents and residents of other countries, widened by $20.7 billion, or 11.8 percent, to $195.7 billion in the first quarter of 2021, according to statistics from the U.S. Bureau of Economic Analysis (BEA). The revised fourth quarter deficit was $175.1 billion.

The first quarter deficit was 3.6 percent of current dollar gross domestic product, up from 3.3 percent in the fourth quarter.

The $20.7 billion widening of the current account deficit in the first quarter mostly reflected an increased deficit on goods and a reduced surplus on primary income. 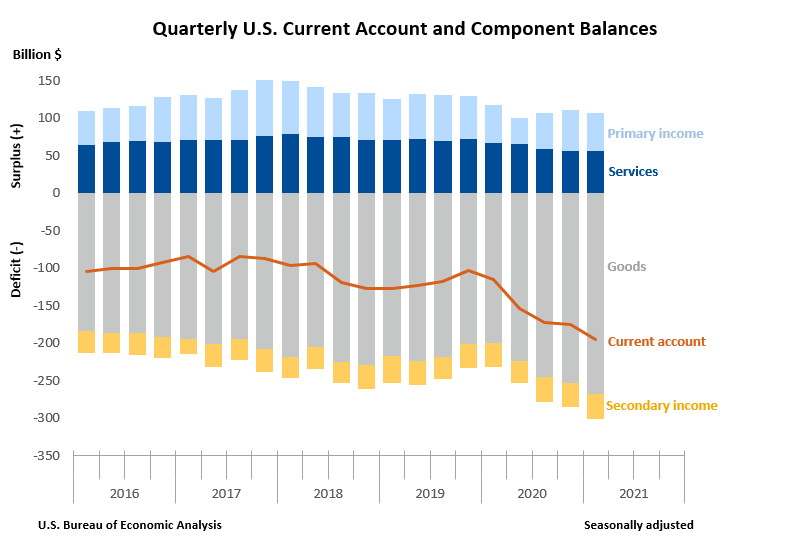 COVID-19 Impact on First Quarter 2021 International Transactions
All major categories of current account transactions increased in the first quarter of 2021, the third consecutive quarter of broad-based growth following notable COVID-19-related declines in the second quarter of 2020. The full economic effects of the COVID-19 pandemic cannot be quantified in the statistics because the impacts are generally embedded in source data and cannot be separately identified. For more information on the impact of COVID-19 on the statistics, see the technical note that accompanies this release. 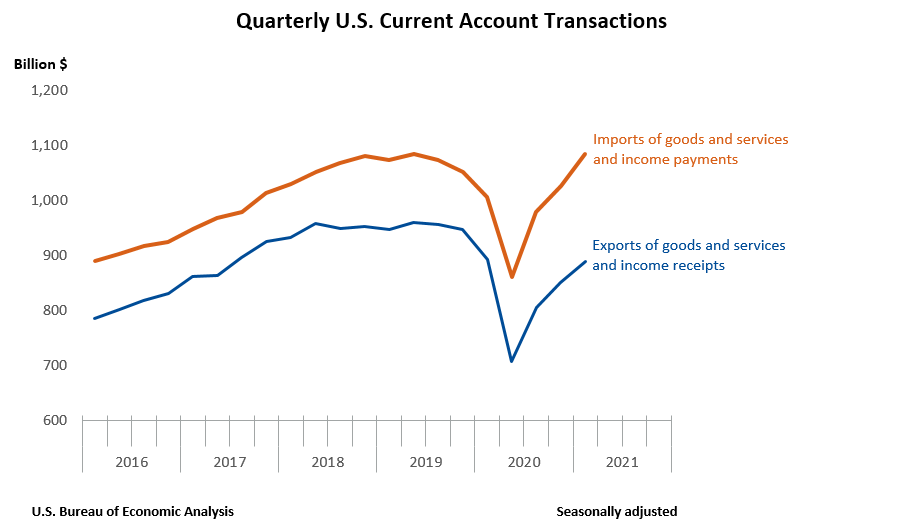 Exports of services  increased $1.1 billion, to $175.9 billion, reflecting mostly offsetting changes in several major categories. Increases were led by travel, mainly other personal travel; decreases were led by charges for the use of intellectual property, mainly for licenses to reproduce and/or distribute computer software. Imports of services increased $1.8 billion, to $120.2 billion, mostly reflecting an increase in transport, primarily sea freight transport.

More information is available in “Preview of the 2021 Annual Update of the International Economic Accounts” in the April 2021 issue of the Survey of Current Business, and additional information will be provided in the July issue. An updated and expanded version of the U.S. International Economic Accounts: Concepts and Methods will be available in July 2021.