Direct Investment by Country and Industry, 2021

The U.S. direct investment abroad position, or cumulative level of investment, increased $403.3 billion to $6.49 trillion at the end of 2021 from $6.09 trillion at the end of 2020, according to statistics released today by the U.S. Bureau of Economic Analysis (BEA). The increase reflected a $352.6 billion increase in the position in Europe, primarily in Ireland and the United Kingdom. By industry, holding company affiliates owned by U.S. manufacturers had the largest increase.

The foreign direct investment in the United States position increased $506.1 billion to $4.98 trillion at the end of 2021 from $4.47 trillion at the end of 2020. The increase mainly reflected a $378.4 billion increase in the position from Europe, primarily the Netherlands and the United Kingdom. By industry, affiliates in manufacturing and information accounted for the majority of the increase. 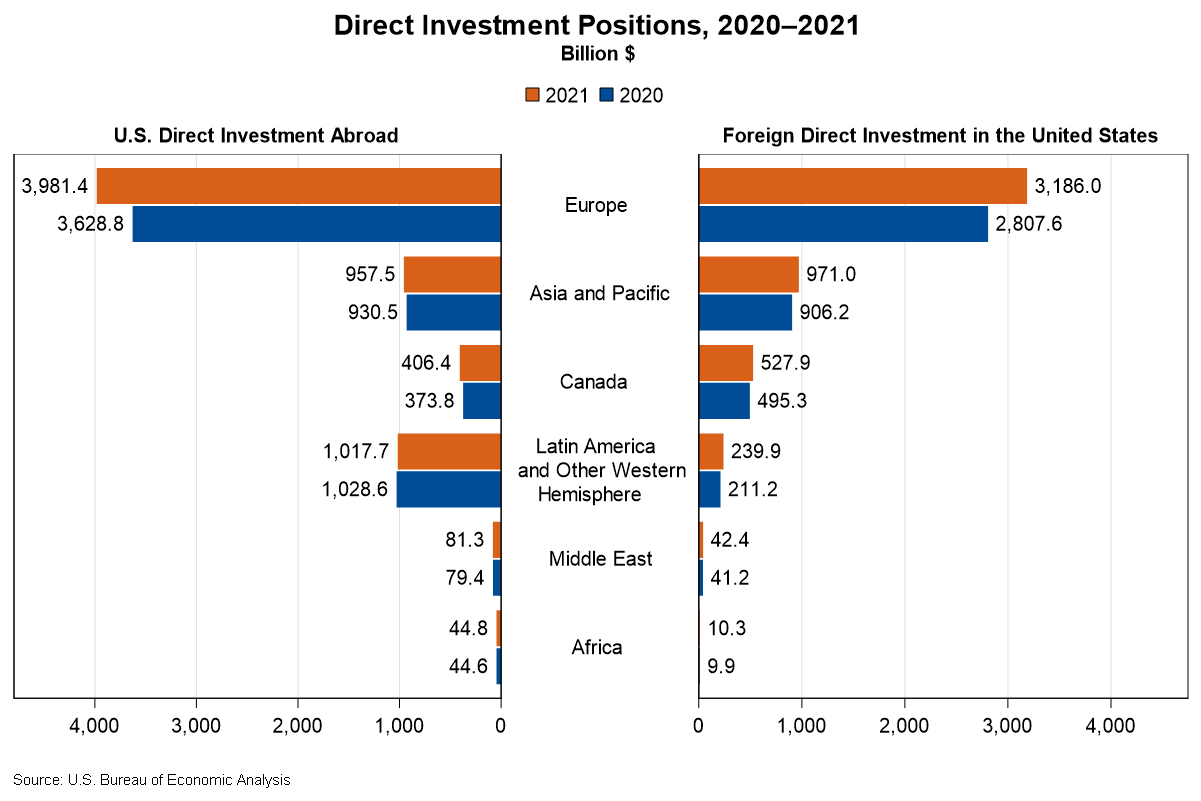 U.S. multinational enterprises (MNEs) invest in nearly every country, but their investment in affiliates in five countries accounted for more than half of the total position at the end of 2021. The U.S. direct investment abroad position was largest in the United Kingdom ($1.0 trillion), followed by the Netherlands ($885.3 billion) and Luxembourg ($715.6 billion). Ireland ($556.6 billion) and Canada ($406.4 billion) rounded out the top five.

By industry of the directly owned foreign affiliate, investment was largest in holding companies, which accounted for 47.3 percent of the overall position abroad in 2021. Finance and insurance affiliates were second largest, with 15.6 percent, and manufacturing affiliates were third largest, with 14.1 percent, of U.S. investment. By industry of the U.S. parent, investment by manufacturing MNEs accounted for 49.3 percent of the position, followed by MNEs in finance and insurance (15.1 percent).

By country of the ultimate beneficial owner (UBO), Japan ($721.0 billion) remained the top investing country in terms of position at the end of 2021. Germany ($636.5 billion) moved up one position from 2020 to be the second-largest investing country, moving Canada ($607.3 billion) to third. The United Kingdom ($565.2 billion) and Ireland ($353.0 billion) were the fourth- and fifth-largest investing countries, respectively. On the UBO basis, investment from the Netherlands and Luxembourg was much lower than by the country of foreign parent, indicating that much of the investment from foreign parents in these countries was ultimately owned by investors in other countries.

Foreign direct investment in the United States was concentrated in the U.S. manufacturing sector, which accounted for 42.4 percent of the position. There was also sizable investment in finance and insurance (12.5 percent) and wholesale trade (9.7 percent).

Foreign MNEs earned income of $275.3 billion in 2021 on their cumulative investment in the United States, an 82.4 percent increase from 2020.

Next release: July 2023
Direct Investment by Country and Industry, 2022

The ultimate beneficial owner (UBO) is the person or entity, proceeding up a U.S. affiliate's chain of majority ownership (where the entity above owns more than 50 percent of the entity below), beginning with the foreign parent, that is not owned more than 50 percent by another entity. The UBO ultimately owns or controls, and thus ultimately derives the benefits and assumes the risks from owning or controlling, an affiliate. The country of the UBO is often the same as that of the foreign parent, but it may be a different country or the United States.

The direct investment position is the value of direct investors' equity in, and net outstanding loans to, their affiliates. Changes in the position result from financial transactions and other changes, including capital gains and losses, currency-translation adjustments, and other changes in volume and valuation, such as adjustments to book value from affiliates' current sale or purchase price.

Reinvestment of earnings is an affiliate's total earnings less dividends paid to its parent. It represents the part of earnings that are reinvested in the affiliate rather than repatriated to the parent.

The direct investment positions in this release are valued at historical cost. Positions reflect the book value of direct investors' equity in, and net outstanding loans to, their affiliates. This valuation is derived principally from the accounting records of affiliates, which are primarily compiled under U.S. Generally Accepted Accounting Principles or International Financial Reporting Standards. This differs from the market value measure featured in the U.S. net International Investment Position (IIP) Accounts.

Statistics on direct investment by country and industry are one part of a broader set of U.S. International Economic Accounts that, taken together, provide a comprehensive, integrated, and detailed picture of U.S. international economic activities.

The  IIP Accounts are released quarterly. The IIP is a statistical balance sheet that presents the dollar value of U.S. financial assets and liabilities with respect to foreign residents at a specific point in time.

The ITAs are released quarterly. The ITAs are a statistical summary of economic activity between U.S. residents and the residents of other countries.