These data have been superseded. Please see our latest releases for current estimates and contact information.
Explore Product View
BEA 22-45 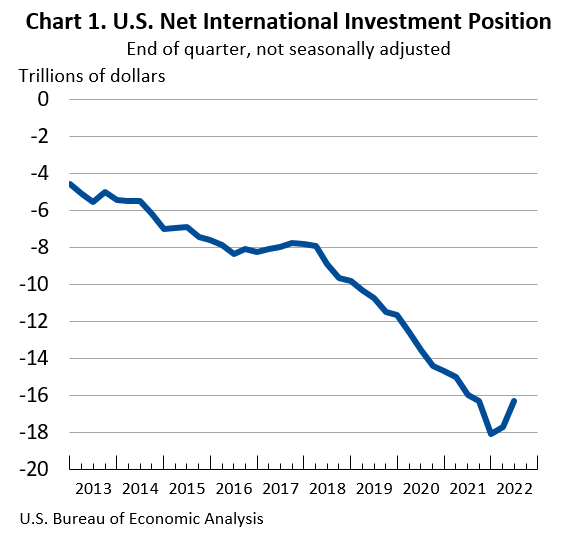 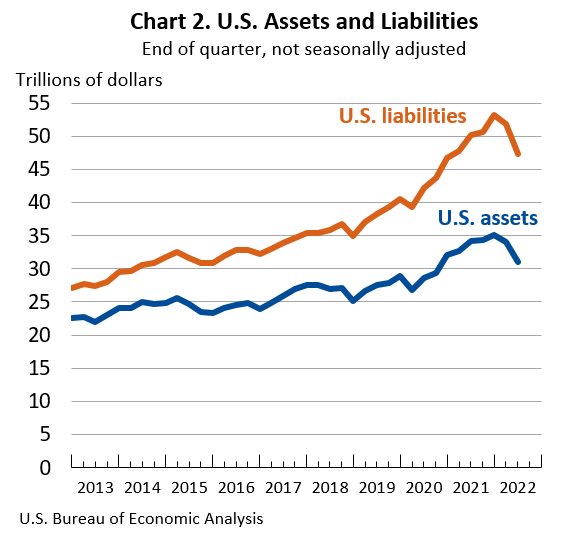 The $1.44 trillion change in the net investment position from the first quarter to the second quarter came from net financial transactions of –$139.1 billion and net other changes in position, such as price and exchange-rate changes, of $1.58 trillion. Net other changes mostly reflected U.S. stock price decreases that exceeded foreign stock price decreases, which lowered the value of U.S. liabilities more than U.S. assets (table A). 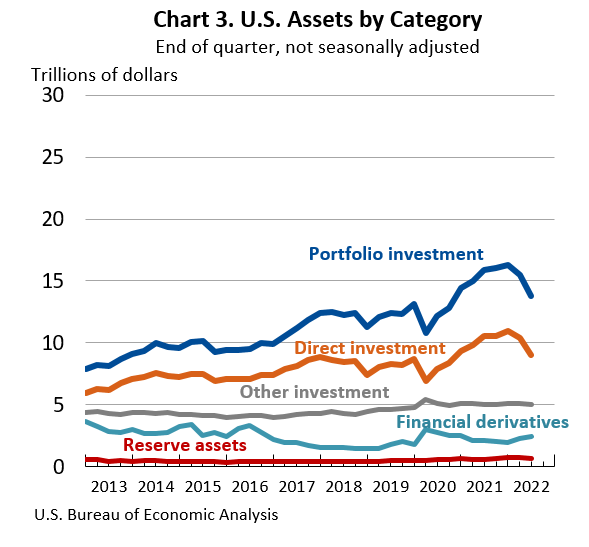 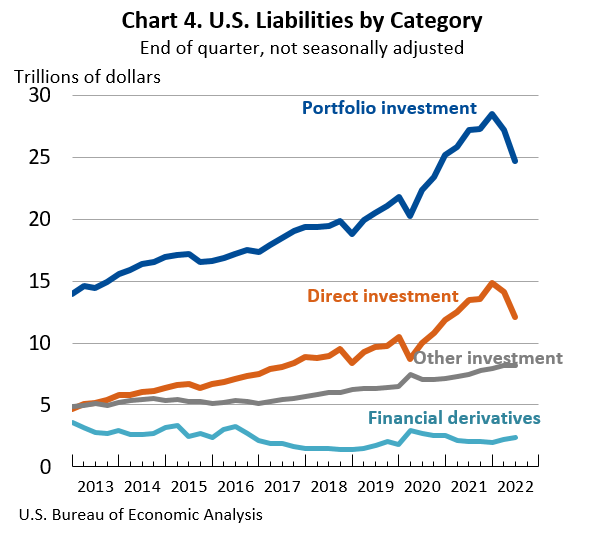 The international investment position (IIP) is a statistical balance sheet that presents the dollar value of U.S. financial assets and liabilities with respect to foreign residents at a specific point in time. BEA presents IIP statistics at the end of a quarter or year (March, June, September, and December). For the March and June releases, BEA also presents statistics on changes in the yearend position that are disaggregated into financial transactions, price changes, exchange-rate changes, and changes in volume and valuation not included elsewhere (n.i.e.).

Financial transactions are transactions between U.S. residents and nonresidents in financial assets and liabilities. They are also recorded in the financial account of the International Transactions Accounts (ITAs). See "Related statistics" below.

Price changes (only presented for annual statistics in the March and June news releases) are changes in the value of an asset or liability due to changes in the market price of a financial instrument.

Changes in volume and valuation n.i.e. (only presented for annual statistics in the March and June news releases) reflect changes in position due to year-to-year shifts in the composition of reporting panels, the incorporation of more comprehensive annual and benchmark survey results, and revaluations (holding gains and losses) on assets and liabilities that are not explained by price changes or exchange-rate changes.

Reserve assets are those external assets that are readily available to and controlled by U.S. monetary authorities for meeting balance-of-payments financing needs, for intervention in exchange markets to affect the currency exchange rate, and for other related purposes such as maintaining confidence in the currency and the economy and serving as a basis for foreign borrowing. The major published components are monetary gold, International Monetary Fund (IMF) special drawing rights, reserve position in the IMF, and other reserve assets.

The IIP statistics comprise one part of a broader set of U.S. International Economic Accounts that, taken together, provide a comprehensive, integrated, and detailed picture of U.S. international economic activities.

Statistics on international services include detailed annual information on trade in services and on services supplied through the channel of direct investment by affiliates of MNEs.

U.S. International Trade in Goods and Services, released by BEA and the U.S. Census Bureau, provides monthly statistics on trade in goods and services.