Majority-owned U.S. affiliates (MOUSAs) of foreign multinational enterprises (MNEs) employed 7.95 million workers in the United States in 2019, a 1.1 percent increase from 7.86 million in 2018, according to statistics on MOUSA operations and finances released by the Bureau of Economic Analysis.

MOUSAs accounted for 6.0 percent of total private-industry employment in the United States. Employment by MOUSAs was largest in manufacturing and in retail trade. MOUSAs with ultimate owners in the United Kingdom, Japan, and Canada were the largest contributors to total MOUSA employment. (See the Additional Information for definitions of MOUSAs and other terminology used in this release.) 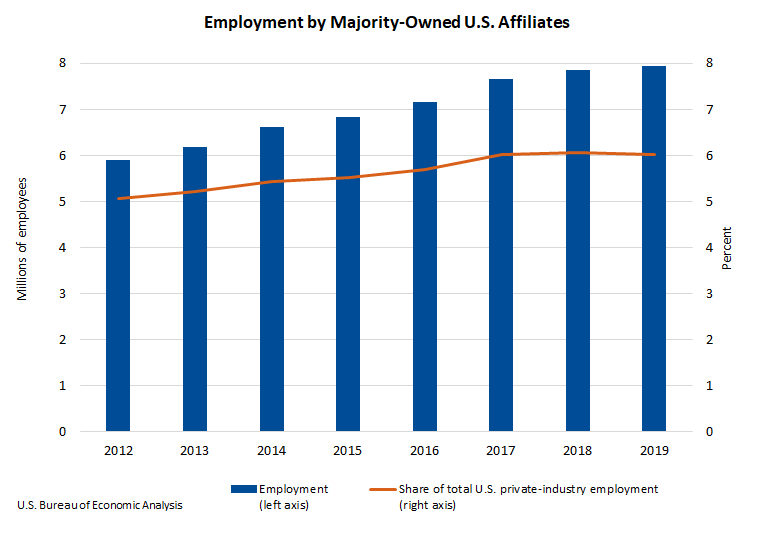 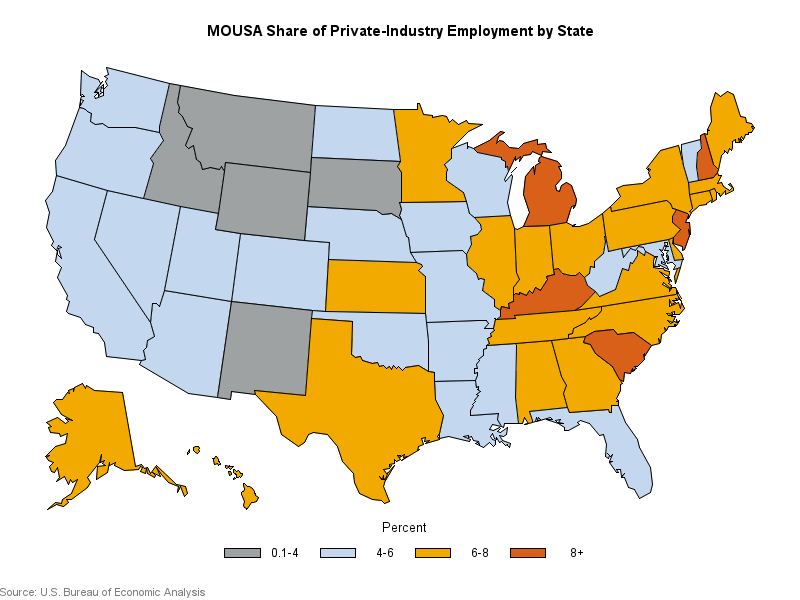 By state, private-industry employment accounted for by MOUSAs was highest in South Carolina (8.9 percent), New Hampshire (8.4 percent), and Kentucky (8.2 percent). In all three states, MOUSAs in the manufacturing industry employed the most workers.

Additional statistics on the activities of U.S. affiliates of foreign multinationals including sales, balance sheet and income statement items, compensation of employees, trade, and more are available on BEA's website. More industry, country, and state level detail are available on the website and will be highlighted in the September issue of the Survey of Current Business.

Statistics for 2018 are revised to incorporate newly available and revised source data. Preliminary statistics for 2018 were released in November 2020 and highlighted in "Activities of U.S. Affiliates of Foreign Multinational Enterprises in 2018" in the December 2020 issue of the Survey of Current Business.

The ultimate owner, also referred to as ultimate beneficial owner (UBO), is that person, proceeding up a chain of majority-ownership (where the entity above owns more than 50 percent of the entity below), beginning with and including the foreign parent, that is not owned more than 50 percent by another person. Unlike the foreign parent, the UBO of an affiliate may be located in the United States.

Value added is the value of the final goods and services produced by a firm's labor and property. Value added represents the firm's contribution to gross domestic product. The estimates of value added in this release were prepared by summing cost and profit data collected in BEA's surveys of foreign direct investment in the United States and are conceptually consistent with BEA's estimates of U.S. value added by industry.